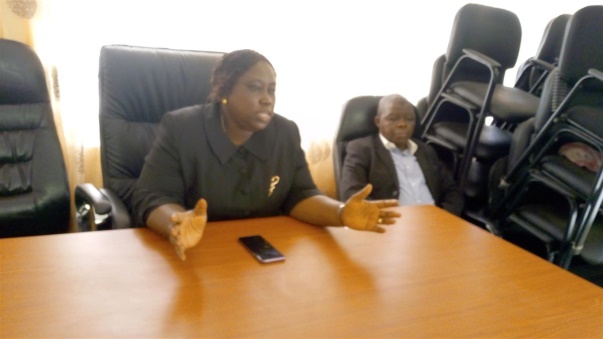 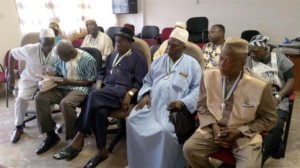 The Legal Aid Board and the Council of Tribal Headmen have agreed to work together to put a stop to prohibitive fines imposed by Sub-Chiefs which is undermining access to justice for their subjects. ‘We have a complaint against a Sub-Chief who imposed a fine of Le 500,000 (US $68) on a respondent,’ one of the adjudicators for the Board’s Alternative Dispute Resolution, Mr. Alghasimu Sesay said.
The agreement was reached at a meeting in the Justice Hall at the Sierra Leone Legal Aid Board in Freetown on Tuesday, 26 March 2019.
The two agreed to enforce existing guidelines relating to fines which chiefs can impose in their courts. The Mende Tribal Headman, Mr. Jibao Young said the existing guidelines state clearly the fines which Tribal Headmen and their Sub-Chiefs can imposed. ‘We developed these guidelines following complaints from our subjects regarding prohibitive fines,’ he said. ‘The guidelines provides that the fines should not exceed Le 25,000 (US $3) for those imposed by Tribal Headmen and Le 15,000 (US $1.7) for those imposed by Sub-Chiefs.’
The Board and the Council agreed to hold a big event at the Attouga Stadium to educate the Tribal Headmen and their Sub-Chiefs on this issue. The Legal Aid Board will support in enforcing these guidelines by taking necessary action against those who flout them. ‘Moving forward, we want to make sure those who are found wanting will not claim to be ignorant of the Guidelines,’ the Executive Director of the Legal Aid Board, Ms. Fatmata Claire Carlton-Hanciles said.
The Legal Aid Board and Council of Tribal Headmen also discussed issues bordering on promoting reconciliation following divisive elections. It was observed that the March 2018 elections divided communities and families. ‘As we speak marriages and neighbors have been torn apart,’ Ms. Carlton-Hanciles said. In this respect the tribal headmen and their sub-chiefs should work towards reconciling not only their tribe’s people but also between the various tribes.
It was observed that the Council of Female Chiefs is not inclusive of the all the sixteen tribes. ‘I had this concern some time ago but nothing has been done,’ Chief Jibao Young said. The Legal Aid Board was asked to work with the Female Chiefs to ensure the group is representative of all the ethnic groups in the country.
The Council agreed to work with the Legal Aid Board in the ‘Hands Off Our Girls’ Campaign by adopting a preventive approach to Sexual Penetration and other forms of sexual violence. This will include community sensitization meetings and focused group discussions to educate people on the law and our culture.