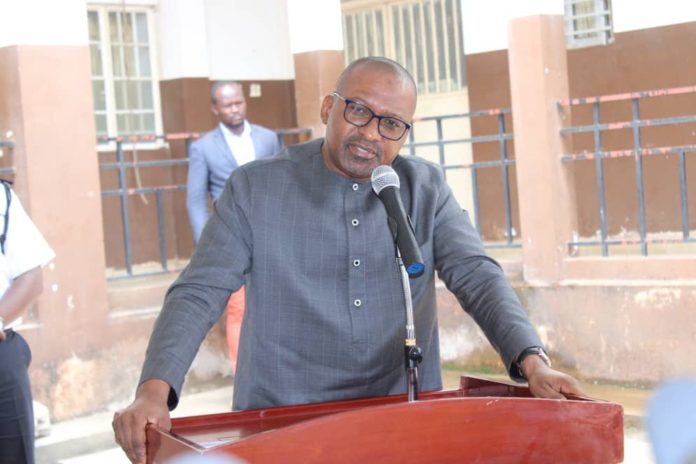 With the outbreak of the coronavirus in Sierra Leone and the PMB Wellington fire disaster that consumed so many lives, it again dawned that efforts must be scaled up to beef up the health sector in the country after realizing that there were major gaps.

It was against this backdrop that the Vice President, Dr. Mohamed Juldeh Jalloh, on the 12th of  April 2022,   commissioned the newly renovated  Medicines Sans Frontier’s  (MSF) Intensive Care Units with a brand-new oxygen plant at the Connaught Hospital in Freetown.

According to the Vice President, the brand-new oxygen plant will address the numerous challenges and intensive care cases that are referred to the hospital.

He furthered that Connaught Hospital is now proud of having an ICU with the capacity to serve both the Connaught hospital and other facilities outside of the hospital.

The Vice President said a couple of months ago, he had an opportunity to visit the hospital and did a tour along with the Hospital Care Manager, Dr. Mustapha Kabba. During the course of the conducted tour at the hospital, he confessed that he saw the enthusiasm from the Connaught Hospital Management in transforming the hospital.

Dr. Mohamed Juldeh Jalloh assured citizens that the new Annexed Building adds to the quality health care including the new oxygen plant and the special ward. He therefore, thanked the Management of the hospital and development partners for their support

“The COVID-19 Pandemic really brought to light the importance of oxygen facilities. During COVID-19 people were even forced to go in search of oxygen but  today to have an oxygen plant that has the capacity to serve the ICU and also other facilities outside of Connaught, gives  no doubt about the good work of the Management of Connaught,” he stated.

Minister of Health and Sanitation, Dr. Austin Demby congratulated Connaught Hospital for winning three critical awards on Saturday April 9th as the best referral Hospital in the country. He added that Connaught Hospital bagging such awards is a clear testament to the leadership and good work the hospital Management is doing to save lives. He recalled that months ago Connaught was described as a filthy place but with the leadership quality provided by Dr. Mustapha Kabba, the hospital is now meeting the demands of its people and everything about the hospital is basically on transformational drives.

Dr. Austin Demby reiterated that there are four major components that are going to transform hospitals including physical infrastructure. He also assured that Government will continue to give the right infrastructure and resources to all Government health facilities across the country. Dr. Demby also said equipment and supplies are one of their transformation approaches to address the challenges faced by hospitals management and also to complement the staff capacity. He reassured Government’s commitment in making sure that the hospitals have the right staff capacity that would address the patients’ ratios in the country.

The Connaught Hospital Care Manager Dr Mustapha Kabba disclosed that in line with their strategic plan, the hospital has been able to display major development strides in the last 10 months. He further revealed that six wards have been renovated including the newly commissioned Annexed Building. Dr Kabba added that a donated waste management truck was allocated to the hospital, incinerators have been built and refurbished, specialist outpatient department has been renovated, surgical instruments to treat complex fractures have been provided, and ophthalmology services have also been provided to the hospital.

Dr. Mustapha Kabba stated that as they rolled out phase 2 of their strategic plan, which basically entails specialist services, he assured the Vice President and Minister Demby that the newly renovated Annexed building coupled with ICU and oxygen plant, would now contribute tremendously in achieving the overhaul objective of the hospital. He concluded by intimating that the new renovated Annexed building is a 50 bed space facility designed to provide some privacy and extra comfort to the patients admitted.