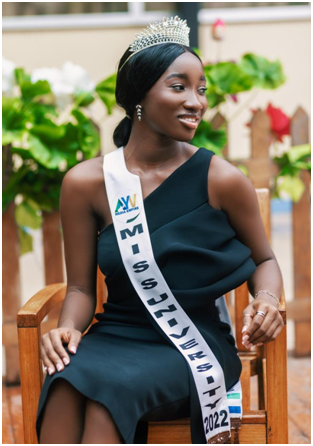 During a Press Conference took place on the 4th August 2022 at the AYV Media Empire Boardroom the winner of the AYV Miss University 202, Mariyam Lorba Konneh, was unveiled as a representative of the forth coming Miss University Africa, an international pageantry that will be hosted in Nigeria in November 2022.

The Director of Commercial Marketing and Brand at the Africa Young Voices (AYV), Daniel Moore, stated how the aforementioned competition will be as it is slated to celebrate beauty, brains and womenfolk especially with the way Africans accept how women should behave in public.

He continued that it is not one that endorses the Western type of pageantry which allows the display of nudity further revealing how the present Miss University Africa is an “Ijabist” from Somalia, stating how that subscribes to her Islamic faith and  shows what their Muslim tenets will subscribe to and what will not be subscribed to.

Daniel Moore intimated that it is a joy for them to unveil Mariyam Lorba Konneh who has been chosen to represent Sierra Leone in the Miss Africa University 2022 also underscoring how she doubles as Miss IPAM and Miss University AYV.

He noted that the upcoming pageant does not just celebrate beauty and brains but will also celebrate good character, maintaining that it is not just about being beautiful and brilliant, but having a good character as well matters and according to him Mariyam possesses them.

Hawa Turay, Chairperson of the AYV Miss University Committee, said Mariyam is beautiful, intelligent and a well composed woman, explaining how she proved herself to the judges and that was how she won.

She expressed hope that she will deliver as expected of her, maintaining that she believes that she is the right person for the journey disclosing how Mariyam has been preparing for it for some time now.

She also highlighted her readiness to give her all the support she needs for the contest, encouraging all Sierra Leoneans to support her in any way they can, for her to bring the crown to Sierra Leone.

Speaking at the conference, Mariyam Lorba Konneh, a year two student at IPAM in the Banking and Finance Department, stated that she always wanted to be a star, and according to her, that was why she used the opportunity to showcase to the world what she is capable of doing.

She disclosed how she was raised in a decent environment maintaining how her very strict dad used to have a negative perception about pageantry but after she educated him about it his perception changed stating how her father and the entire family have been so supportive.

She maintained how good she is in manipulating people like how she manipulated her dad into seeing pageantry in the good light. Continuing, Mariyam said she will use the same manipulative skills to convince the judges in the contest that she is the best and that she deserves the crown.

Musu Atteh Konneh, the mother of Mariyam expressed her gratitude to God and the AYV Media Empire. “I am a proud mother,” she stated.

She affirmed herself and her entire family’s support to her daughter also confirming how strict Mariyam’s father is and how she was able to manipulate him.