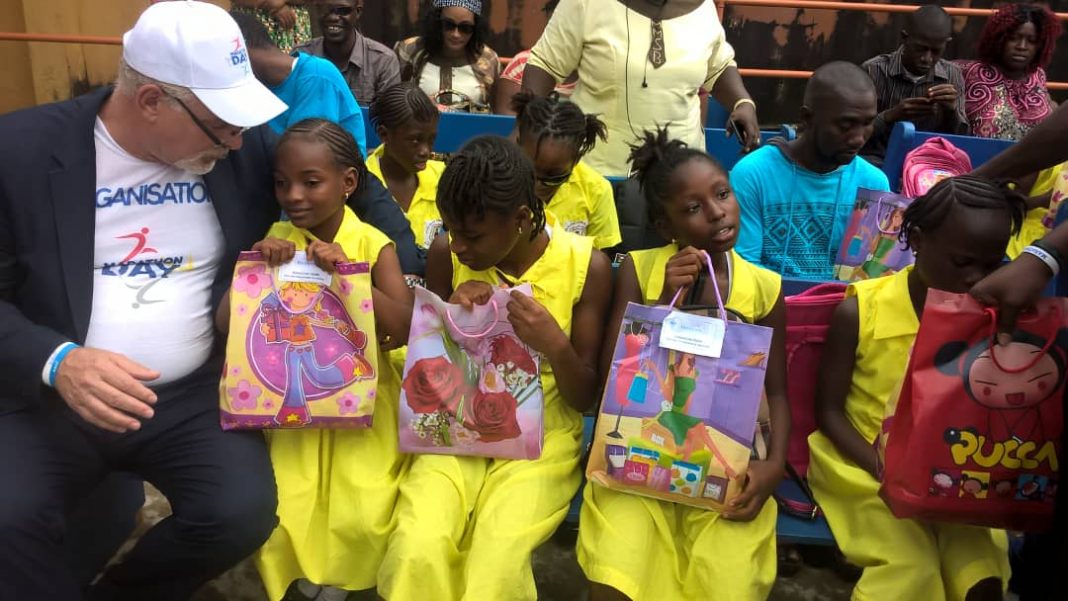 Bollore Transport and Logistics, which controls the Freetown Terminal at the Queen Elizabeth II on Wednesday 25th September 2019 demonstrated its humanitarian posture by donating food and non-food items as well as a 20,000 litre Milla water tank facility to the Milton Margai School for the Blind and the National School for the Deaf and Dumb at Wilkinson Road in Freetown.

The donation of such items brought smiles to the faces of the pupils and staff of both schools. Items that were donated included bags of rice, onions, bundles of zinc, chocolates and candy placed in packs for each and every pupil.

The two schools received the items by surprise, expressing how timely these gestures arrived to help salvage their constraints giving them happiness as they will help in addressing their pressing needs.

In his statement, Bollore’s Country Manager in Sierra Leone, Captain Fabianjanko Kokan, expressed his company’s position in serving humanity, which he said is part of their policy. He added that though the donation will help them overcome some of the hardship the pupils and by extension the institutions have been bedevilled with.  ’This donation is just like a drop in the ocean. The schools need more and this is not a question of corporate social responsibility but that of serving humanity,’’ Kokan pointed out.

‘The schools need help,’ he said and further appealed to other entities to come to the aid of the two schools by addressing some of their needs. He recognized CTC and Milla Group as their partners and officially handed over the items.

Several speakers from the two schools expressed appreciation and praised the company for their humanitarian gesture. They offered special prayers for the company to gain higher height in their operations.

Speaking on behalf of the Milton Margai School for the Blind, Sallieu Turay, the Principal, said, Bollore’s visit to them was not by mistake but by God’s will. He said the Milton Margai School for the Blind has been in operation for 63 years and is the first blind institution in the country. The school, he said, has produced many personalities of which some have served as Ministers, Commissioners in different Ministries, Departments and Agencies.  He expressed special thanks and appreciation on behalf of the school to the Management and staff of Bollore for what he described as a special gift from God.

Turay added that the bags of rice donated will be of great help to them, considering that the children are entitled to three square meals a day.  ‘’Here we cook a bag of rice a day and if you calculate that within the year, it will amount to 365 bags of rice. This clearly tells you how appreciative we are for this donation.  Also, if I tell you how grateful we are for the water tank, you won’t understand. With these 20,000 litres of water tank, our problem of water shortage has been finally addressed. Our children will no longer go out in search of where to fetch water.”