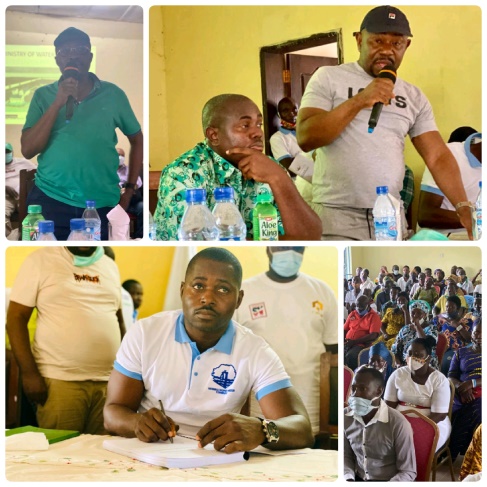 Management of Sierra Leone Water Company (SALWACO), headed by  Joseph Munda Sandi together with the Minister of Finance, Jacob Jusu Saffa and the Director General of the Sierra Leone Roads Authority, Mr. Amara Kanneh  on Saturday 6th June, 2020 conducted a symbolic signing of contract for the reconstruction and construction of Bonthe water supply project.

In his statement, the Managing Director of SALWACO stated that Bonthe Island will get a desalination pipe borne water supply.

Joseph Munda Sandi said water is in the agenda of His Excellency, noting that two weeks ago in Parliament, the  President made a statement on the provision of the Bonthe water project and finally the contract has been signed.

Sandi continued that SALWACO is responsible to providing water in every part of the country except Freetown. He therefore called on the residents of Bonthe municipality to appreciate the Minister of Finance for his passion he has for water.

He said the project has two components: the desalination component which is turning of salt water into fresh and safe drinking water and the other component is the reconstruction of the dilapidated degremont facility. Also, there will be an office space and accommodation for SALWACO operations.

“This project will create job opportunities for the youths around the Municipality and I hope that in the next couple of weeks the President will do turning of sod in the Bonthe municipality,” he stated.

In his keynote address, the Minister of Finance, Jacob Jusu Saffa said the money for the reconstruction and construction of the Bonthe water supply project is in the bank waiting for the conclusion of SALWACO papers work.

As a development expert, the Minister of Finance stated that the provision of safe drinking water in every part of Sierra Leone has a direct link to education and good health. Hence, investing now in water will reduce future cost in managing health crisis such as cholera and other water borne diseases.

He added that water is a core component to Human capital Development further stating that : “This project is a full funded Government project with a total cost of 121.8 billions Leones and it is going to be one of the fastest projects to be implemented.

In response to the call of the President for collaboration between agencies, the Director General of SLRA, Amara Kanneh said when different MDAs collaborate, it yields positive outcomes and reduce cost on Government expenditures.

He stated that SLRA and SALWACO will work collaboratively in developing the Bonthe municipality. “I’m happy to be part of the signing of the project in Bonthe, this shows how committed the two agencies are working hard to complement the agenda of the New Direction,” he stated.

The Deputy Speaker of Parliament, Hon. Sengehpoh Thomas, in his statement applauded both SALWACO and the Minister of Finance for a job well done, adding that the current Government is a “talk and do” Government.

He therefore called on the stakeholders and youths of Bonthe municipality to own the project and support the contractors.

In his conclusion, the Deputy Speaker of Parliament said after forty-five years of no pipe borne water, the Bonthe Municipality has something to celebrate… His Excellency, Julius Maada Bio and the New Direction.