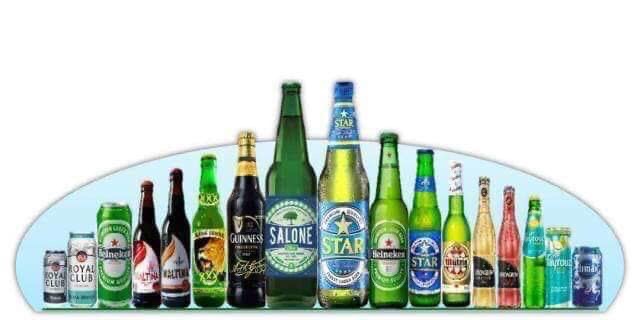 This medium can categorically state, based on empirical evidence gathered so far through social interactions at various points, that many are truly enjoying the different beverages that the Sierra Leone Brewery Limited (SLBL) is manufacturing especially during this festive season. With our team moving from one entertainment point to another it was evidently glaring that most are appreciating the alcoholic and non-alcoholic beverages that the company has specialized in producing.

Chatting with some of them they honestly stated how they are indeed really enjoying the refreshing taste of the beverages adding that they are of high quality and standards. They expressed appreciation to the company for making it possible to access their favourite drinks further appealing that efforts must be made to ensure that there is no shortage as the holidays are just around the corner and a lot of social activities are lined up ,times when the company’s beverages go like hot cakes on the market.

As a very pro-active company, the SLBL always think out of the box which was why prior to the commencement of the festive season it imported four massive beer tanks which has already been stored meaning that as far as storage facilities are concerned they have been increased to respond to growing demands. “Shortage during the festive season is as a result of a lot of social events like marriages, outings, office and house parties etc when demands go high. Some retailers hoard drinks thereby creating artificial scarcity just to make more profits. However, with our new strategy there is every likelihood that such will not occur,” Albert Ojo Collier, the Corporate Affairs Manager of SLBL dilated adding that with the company’s new Managing Director, Laurent Bukasa, who is a specialist in marketing there is optimism that there will be enough to drink and spare during this period.

One honour that the company has bagged long ago is its pro-active rolling out of its Corporate Social Responsibility which has improved communities not only within its operational area of production but even beyond thereby positively impacting lives.

It is on record that SLBL, in close collaboration with the Heineken Foundation, has facilitated and championed the construction of state-of-the-art water wells in communities close to its Wellington Industrial Estate where the company is located.These are communities where, hitherto, accessing pure water supply was a serious nightmare as clean water supply points were non-existent giving rise to various societal ills such as teenage pregnancy, children dropping out of the educational system simply because they moved from one place to another just to fetch water and even when they access one they would spend hours on end before finally getting water.

At the end of the day they have become so tired to an extent that there is no time for concentration on their studies. The commendations that have been heaped on the company for giving them respite are very overwhelming and speak volumes of how SLBL is giving back to communities and complementing Government’s development interventions.

The company has been doing the same in terms of giving supports to education, health, sports etc thereby beefing up those sectors and help in identifying local talents.

One of the well placed famers’ groups in the country constitutes Sorghum farmers who plant and harvest sorghum which is an essential ingredient that the company is using in its production chain.

SLBL buys sorghum from these farmers who have formed an organization that is constantly supplying the Brewery with sorghum with an exponential numerical strength of over 25,000 farm families spread in different parts of the country.

These farmers are now benefitting immensely and as a matter of fact SLBL has been embarking on tours just to encourage more people to come on-board and grow sorghum. The relationship between the farmers and SLBL could be best described as symbiotic and is growing from strength to strength.

Timely honouring of taxes to the National Revenue Authority has been done on a regular basis and such is contributing in helping Government to amass the necessary revenue to finance development programmes.

Meanwhile, the Sierra Leone Brewery Limited (SLBL) has assured that there is not going to be any shortage of its favorite beverages. As far as Management of the company is concerned there will be enough manufactured drinks on the market to last over time as there is cause for any mad rush to buy and hoard.