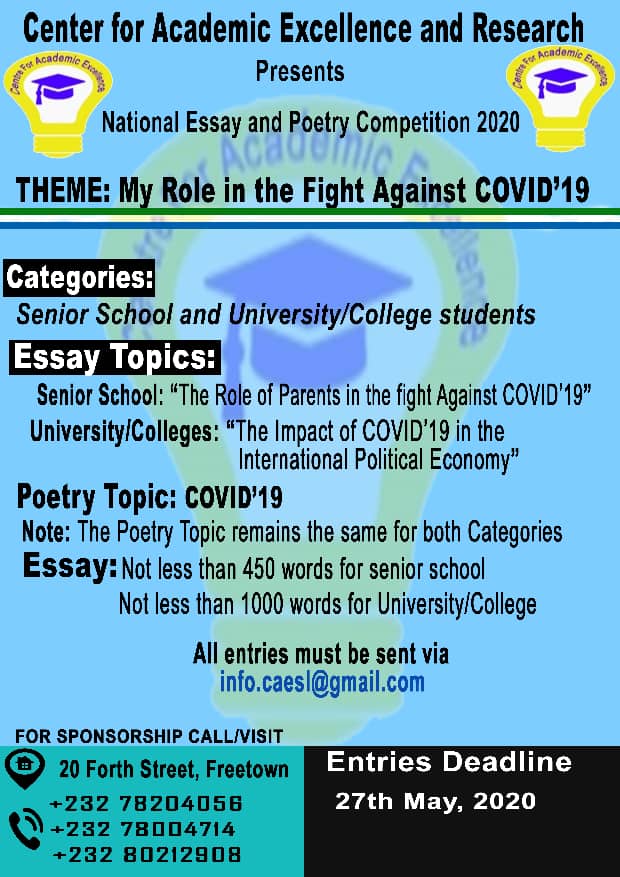 In order for students to exercise their calligraphic abilities in inking sound write-ups that can also be used by state and non-state actors in addressing the challenges that the coronavirus poses and the post impact of the virus, the Centre for Academic Excellence and Research, (CAER-SL) is now poised to host its National Essay & Poetry Competition 2020 on the theme: “My Role in the Fight Against Covid-19”.

To adhere to the preventive measure that Government and its partners have put in place the competition will be focused on online.

Speaking to this medium, the Programs Manager of Centre for Academic Excellence and Research, Alex A. Bah disclosed that since the World Health Organization declared the coronavirus as a pandemic it has seriously hampered all major spheres of society globally and has affected all fabric of society, adding that however, with past experiences of the Ebola outbreak that affected many students and left a number of girls pregnant, it’s of paramount essence to seek out effective means to academically engage their mental faculties.

It is against such a backdrop, they therefore planned the event to galvanize students to exercise their calligraphic abilities in inking sound write-ups that can also be used by state and non-state actors in addressing the challenges posed by the virus.

He said that with almost all attention by both Government and non-governmental institutions focused on sensitization on covid-19 and other laudable mechanisms to curb the spread of the virus, it gives them motivation and befit them to direct their energies in squeezing out the brilliance in future leaders.

Alex A. Bah further disclosed that as in compliance with the stringent measures by the Government of Sierra Leone to maintain social distancing, the official launching was done via the media (TV, radio, and social media handle).

He called for entries for Essays by secondary school pupils on the topic “The Role of Parents and Pupils in the Fight Against COVID 19”, and for university/college students; “Impact of COVID 19 on the International Political Economy”, Which should be sent via info.caesl@gmail.com. He added that the Essays for the senior school and university categories should be not less than 450 and 1000 words respectively. Bah also stated that the topic for the poetry  competition is “COVID 19” which remains the same for both secondary schools and universities/colleges respectively and that all entries will close on the 27 May, 2020.

“As an institution we strongly believe that the integrity of judges demonstrates the credibility of the competition, thus, we have secured the services of individuals with the required academic expertise and moral standing to determine the best essay and poem.

Entries should be sent online and a panel of judicious judges will independently surf through all of them, and will send their judgments to a Chief Judge who will determine winners on a consensus basis, for both respective categories; essay and poetry.

Results will be announced via both the mainstream media; TV and radio, as well as the social media.

Winners will be called upon and attractive prizes will be given to them either live on TV or in the presence of media personnel. “This is to enhance transparency as well as to serve as a motivating factor,” Bah concluded.