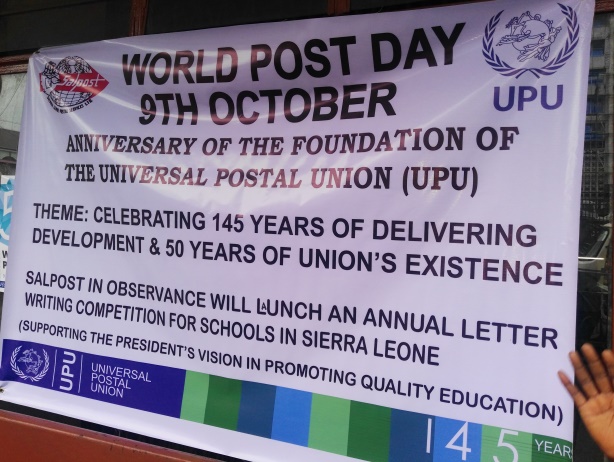 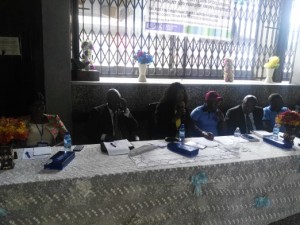 With a view to support the President’s Vision in promoting Quality Education, the Sierra Leone Postal Services (SALPOST) in collaboration  with the Ministry of Basic and Senior Secondary School Education (MBSSE) has on Wednesday 9th October, 2019 launched the yearly letter writing completion for school pupils in Sierra Leone.

The event took place at the commemoration of the 145 years of the existence of the Universal Postal Union and 50 years of World Post Day celebration with the theme: “Celebrating 145 Years of Delivering Development & 50 Years of Union’s Existence” at the institution’s Head Office on Siaka Stevens Street in Freetown.

Deputy Minister of Information and Communication on behalf of the Minster Mamadi Gobeh Kamara disclosed that the purpose of World Post Day is to bring awareness to the Post’s role in the everyday lives of people and businesses, adding that it is also contributing to global social and economic development. She noted that this year’s theme: “Celebrating 145 years of delivering development & 50 years of union’s existence” is not only timely but important towards the rebranding of our postal services in the country.

She noted that prior to the civil war, the post office was rated among the best in the world, but said over the years, SALPOST has lost its vast network, largely due to the civil war, but also because of inability to take advantage of the advent of modern technological innovations like the e-mail and new media.

She added that the New Direction Government led by President Dr. Julius Maada Bio inherited a National Postal Service that was left unprotected against the proliferation of privately run postal service like TNT, Red Coat, UPS and the increasingly domineering DHL which operates seemingly unchecked, against a crucial provision in the current Postal Services Act, which gives exclusive right to SALPOST to handle all mails up to 2kgs.

She assured SALPOST that the Ministry of Information and Communications will support a countrywide network of post offices that will provide Government with many points of contacts with  people for the implementation of  administrative programs in such fields as social security, taxation, and public information, adding that she is of the firm conviction that when the operations of SALPOST are properly developed, the post office may also become one of the principal employers in the country that may help to promote economic growth as it has the potential to become a major user of transport services that will in return create more employment in the country.

Assistant Director, Ministry of Basic and Senior Secondary School Education applauded the Management and Staff of SALPOST as they commemorate “World Post Day”. She added that in its strides to restore education, the Ministry do appreciate and receive with gratitude any intervention that will add value to this assignment.

She said in celebrating this day the Ministry is happy to partner with SALPOST for the formal launch of a yearly letter writing competition for school pupils across the country from primary to JSS3 level.

He assured SALPOST that the Ministry will pledge its support to the programme and any related activity by SALPOST that will contribute to improve on quality education for school pupils.

Managing Director of the Sierra Leone Postal Services (SALPOST), Brima Katta, disclosed that World Post Day is celebrated by 192 member countries around the world on the 9th October every year, adding that the Universal Postal Union (UPU) itself was created in 1874 (145 years ago) furthering how the World Post Day commemoration was first launched at the Universal Postal Congress in Tokyo in 1969 (50 years ago).

He said SALPOST is not only commemorating or celebrating World Post Day but also to raise awareness of the role of the national Postal Service in the everyday life of the people of Sierra Leone, the State and businesses as well as its contributions to global, social and economic development through public/social and financial service delivery.

He noted that SALPOST, in collaboration with the Ministry of Basic Education, Information & Communications, the National Commission for Privatization, DSTI, MoF and other stakeholders would like to mark this year’s celebration with the launching of a special annual event for school pupils across the country, adding that from the 9th October, 2020 they will be organizing a National School Letter Writing & Essay Competition for school pupils .between the age of 9-15, with attractive prizes for winners and runners up.