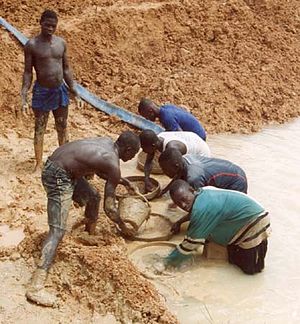 Since the civil war ended in Sierra Leone in January 2002, various Governments have sought to start operations on the country’s first industrial-scale gold mine and increase investment in bauxite and iron ore.

But disputes over multiple licences granted by various authorities during the conflict and after have hampered the process. “We … need to sanitize the whole industry,” former President Ernest Bai Koroma told reporters. “We hope to lay to rest all of the difficulties we have in this mining sector and open it up, because it has a huge potential.”

At the time, in neighboring Liberia the Government completed a review of major mining contracts, including one with the iron-mining company Arcelor Mittal of India. The revised contract removed clauses exempting the company from Liberian environmental and human rights law, removed certain tax holidays and enforced compensation and property rights for people living in areas affected by the mines.

Patrick Alley, Director of Global Witness, an NGO that campaigns for better mining contracts, said that such reviews are vital.

“Predatory and unfair investments in natural resources in developing countries, especially post-conflict countries, set back development,” he says. “It is good that the Liberian government brought Mittal back to the negotiating table, and good that Mittal renegotiated the contract. In countries coming out of wars that were fuelled by natural resources, [bad] deals like this are playing with fire.”

African countries have been through cycles of high and low metal and oil prices before. Previously, bad contracts, mismanagement, corruption and poor investment of windfall revenues continued to leave populations poor and economies undiversified even after bountiful times. Turning this situation around, experts say, will require greater transparency, improved planning for the use of revenues and better partnerships among companies, governments and communities.

Transparency in Africa’s mineral resources industry is especially difficult in countries coming out of war. Civil society activists often cite the mining industry in the Democratic Republic of the Congo. In March 2007 a coalition of more than 100 international and local Congolese non-governmental organizations (NGOs) demanded that the government “renegotiate, revoke, or cancel” disadvantageous mining contracts that had been signed during the war or under the transitional government that was in power from 2002 to 2006.

The NGOs claimed that three of the largest contracts approved by the transitional government had “collectively signed away over 70 per cent of the government’s most valuable copper and cobalt reserves to international companies.” None were negotiated in a transparent manner, the NGOs asserted.

In theory, publishing all data on mining revenues and on what mining companies pay to governments should make it possible for citizens and development experts to track how much of the wealth is being used to help reduce poverty. This, it is hoped, will encourage transparency and accountability on the part of governments and mining companies. Sixteen African countries, including Burkina Faso, Ghana, Liberia, Guinea and Sierra Leone have joined the initiative.