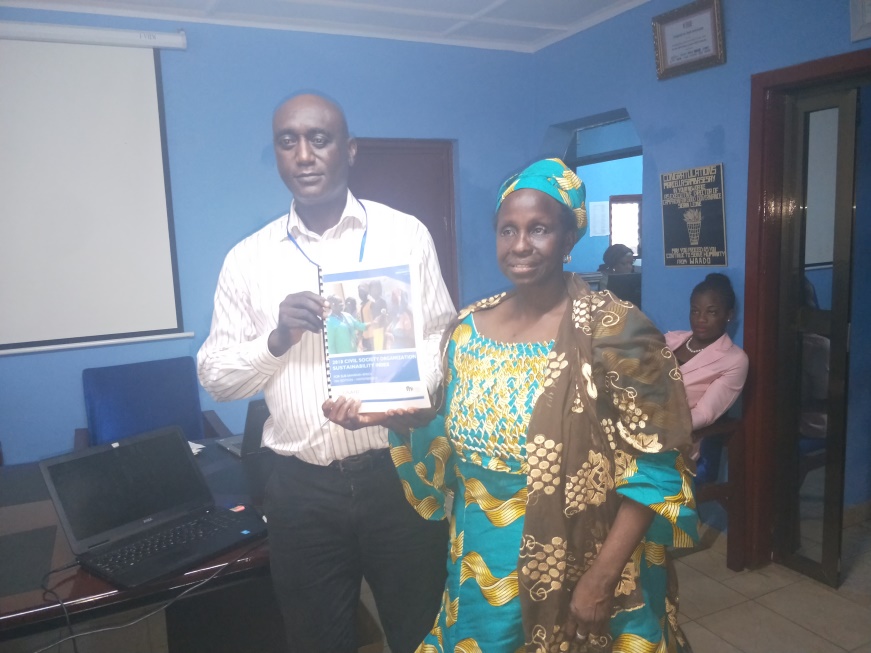 Programme Manager for Campaign for Good Governance, Shar Kendema, disclosed that the report is a ‘health check’ of the sustainability of civil society organizations, adding that this report do come out on a yearly basis.

He said the report looked at the legal environment, advocacy, service provision, public image etc. which he said are issues raised and will be looked into to enhance the development of civil society in the country.

Presenting the findings of the Report, the Programme Officer, Campaign for Good Governance, Amasara Jalloh, said that the 2018 Civil Society Organization Sustainability Index Report is one that looked into the welfare and status of civil societies, adding that the report also looked at the challenges faced by these civil societies in executing their duties.

Underscoring the outcome of the report he said Presidential, Parliamentary and Local Council elections took place smoothly for a transfer of power in March 2018 in Sierra Leone, since the incumbent President, Ernest Bai Koroma, had already served the constitutional limit of two five-year terms, he did not run for a re-election.

“No party crossed the 55 percent threshold in the first round of voting, and after a second round of voting, Julius Maada Bio of the opposition Sierra Leone People’s Party was declared the new President,” he noted adding that the Parliamentary elections resulted in an unusual degree of political diversity as four political parties and a number of independent candidates won seats.

Political tensions were high during the elections, and violent protests erupted in some communities, he said.

The CGG Programme Officer said what further exacerbated the turmoil was the release in July of a report by the new government’s transition team, which took stock of the state of Government Ministries, Departments and Agencies. He also pointed out that soon after assuming power, the new Government initiated a review of the NGO Policy Regulations, which were hurriedly introduced by the previous government in December 2017.

According to him, renaming the policy “Development Cooperation Framework,” the Government has mapped out ways in which to streamline its implementation so as to ensure that CSOs’ projects are in line with Government’s priorities.

He said many analysts have described the policy as draconian, intrusive and aims at closing the space for meaningful CSO engagement and said a revised policy was tabled in Cabinet in December 2018 and was under review for the remainder of the year.

He noted that the overall CSO sustainability was stable in 2018. CSOs’ organizational capacity improved slightly as they broadened their outreach to constituencies beyond urban areas. He said advocacy was moderately stronger as CSOs played a prominent role in ensuring the credibility of the elections. CSOs’ leadership and cooperation with the media during the elections helped boost their public image. At the same time, the legal environment was moderately weakened by implementation of the new NGO Policy, and the sectoral infrastructure suffered slightly from the closure of several resource centers. CSOs’ financial viability and service provision did not change, he maintained.

He noted that the legal environment for CSOs in Sierra Leone deteriorated moderately in 2018 with the introduction of restrictive new regulations under the NGO Policy, which was approved in late 2017. No overarching law governs CSOs in Sierra Leone, he postulated maintaining that CSOs and community-based organizations (CBOs) may operate freely without registration but must register to gain legal status and interact formally with other entities and they may choose to register with a variety of government bodies. Because of the simplicity of its registration processes, most CSOs register with the CAC, which since 2017 no longer demands annual registration renewals, he stated.

Dilating on the area of capacity he said CSOs’ organizational capacity improved slightly in 2018 as many organizations spread their operations beyond urban areas to work with local governments, CBOs, community-led committees, and village groups.

For example, ActionAid Sierra Leone, Campaign for Good Governance (CGG), and Center for the Coordination of Youth Activities formed a coalition to encourage gender-responsive practices by local governments. He noted that the Center for Accountability and Rule of Law, Budget Advocacy Network (BAN), Christian Aid, and Restless Development worked on a public finance management project across several districts to ensure accountability and reduce corruption and that CSOs made strides during the year in building strong relationships with the communities in which they operate, so that even when their projects elapse, beneficiaries can ensure their continuation.

And on the public image he said CSOs’ contributions to the elections led to a moderate improvement in their public image in 2018. The media generally hold CSOs in high esteem and see them as supporting public discussion of national issues. Journalists often cover CSOs’ activities, such as policy dialogues, campaigns against government policies, women’s empowerment, and the monitoring of service delivery and local government and that Media coverage increased in 2018 thanks to CSOs’ involvement in educating and mobilizing citizens, training candidates, and observing polling during the elections.

He said the report contain an aspect in which the media also relied on CSOs to provide credible information on election-related developments and certain CSO leaders were respected for their independent policy analysis and the public looked up to them as trusted and unbiased partners in the country’s development.