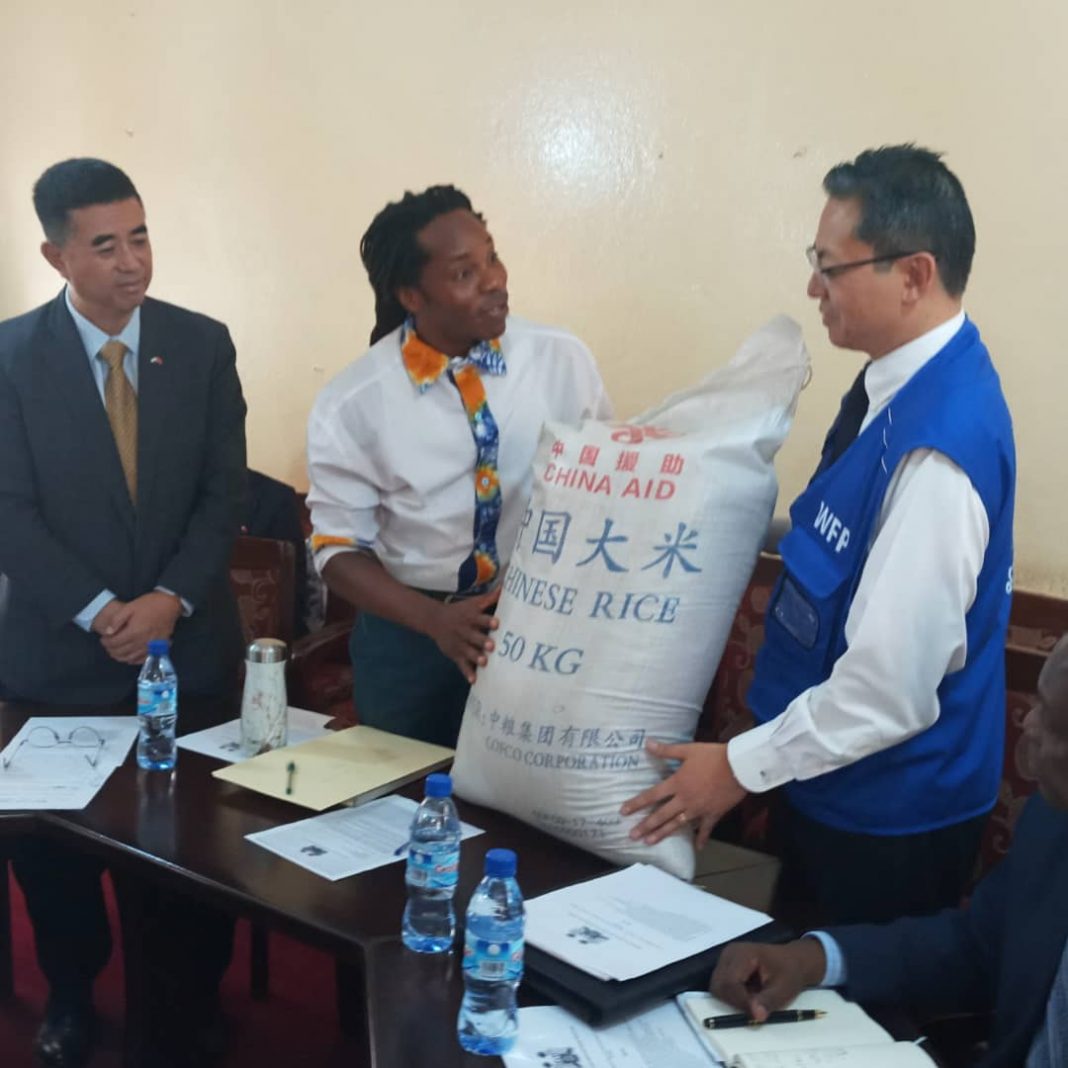 A symbolic handing over of a consignment of rice took place at the Ministry of Basic and Senior Secondary Education (MBSSE) in Freetown. 27,000 50 Kilos bags of rice were handed over to the World Food Program who has been entrusted by Government to champion the feeding of Sierra Leonean school children through the National School Feeding program. Another 30,000 50 Kilos bags of same rice is expected to be handed over to the World Food Program by February, 2020.

In his remarks to dignitaries, the Minister of Basic and Senior Secondary Education, Dr David Moinina Sengeh, registered his appreciation on behalf of the GoSL to the People’s Republic of China for the donation. He also thanked the Minister of Agriculture and Food Security, Mr. Denis Vandy for taking the donated rice away from farmers who are often the traditional beneficiaries of such donations and diverted it to the MBSSE for the national school feeding program. He expressed his appreciation to the President, HE Retired Brigadier-General Julius Maada Bio for his continued commitment to the Free Quality School Education.

The Deputy Minister of Finance Shek Ahmed Fantamadi Bangura spoke eloquently on Government’s position on the rice donation from the People’s Republic of China. He stated that the donation provided “cushion” in the national budget where monies that were to be used to purchase such quantum of rice can now be diverted to some other national priorities. On behalf of the Ministry of Finance, the Deputy Minister reaffirmed Government’s commitment to provide other financial resources that ensure that the World Food Program successfully carry out the school feeding activities without hindrance.

The representatives from the Chinese Embassy expressed their delight for successfully delivering on their promise to the President and people of Sierra Leone. The spokesman for the Chinese Embassy stated that the donation of rice to Sierra Leone is a decision that the two leaders of Sierra Leone and the People’s Republic of China agreed on. He continued to comment that China will continue to assist Sierra Leone whenever possible. He further cautioned the MBSSE and the GoSL not to monetize the donated rice, but rather ensure that it benefits the target beneficiaries.

The symbolic handing over was completed after one of the bags of the donated rice was placed on the conference table and formally handed over to the World Food Program’s Deputy Director Yasuhiro Tsamura.

Yasu, as he is fondly called, assured all about the commitment of the World Food Program in actualizing the President’s desire for school feeding. He expressed his gratitude to the GoSL for choosing his program as the program of choice for the national school feeding. He pointed out the benefits of school feeding on learning outcomes and the development of the human capital of Sierra Leoneans. He asked the GoSL to continue its commitment to support the program by providing the budget needed to augment the resources already at hand.

Fatmata Shaw who represented beneficiaries of the national school feeding from Masahun Kpaka, Pujehun District registered her appreciation for the donation. She asked Government to ensure all children hungry in the country must be fed in order to effectively participate in teaching and learning and achieve expected learning outcomes.