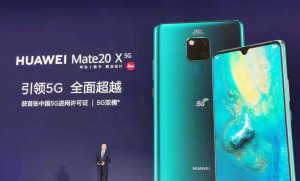 Chinese Ambassador Hu Zhangliang has said that as they are celebrating their 70th National Day on October 1st and they will do it with pleasure and flair because they have unveiled the world’s fastest 5G phone.

He said the Chinese telecoms giant Huawei has unveiled a phone with a folding screen, just four days after rival Samsung became the first major handset maker to offer the feature.

The phone, Mate X, he said will be compatible with the new fifth-generation wireless networks which are starting to be installed around the world.

Ambassador Hu said for 70 years they have toiled and worked under the harshest condition as they fought for survival. He said they were labeled the ‘sick man of Asia’ but they never relented and today they are now respected, rick, prosperous, peaceful and secured.

Ambassador Hu said they did not achieve all these by talk and diplomacy, but by sacrifice, hard work and determination. Today he said China is now a socio capitalist with Chinese characteristics and in the last seven years they have elevated more than 300 million people out of poverty, turning villages to towns and towns to cities.

“We are proud of our achievements and after 70 years, today we can say we are proud of what we have achieved and the support we have given to the world at large. We believe that we can help build a harmonious world where peace and stability reigns and we hope that we will still continue to work with our partners for a secured world.”

On the 5G, the Mate X’s display can fold back on itself to become a 6.6-inch display, slightly bigger than the screen on the foldable phone which Samsung, the world’s biggest smartphone seller, unveiled on Wednesday in San Francisco.

Several other smaller companies are rumored to present their first foldable phones at the trade fair in Barcelona this week.

Handset makers are looking to folding screens to reverse falling smartphone sales as consumers hold on to their devices longer due to a lack of innovations, but analysts predict the market for the feature will be limited, at least in the early days.

Huawei, the world’s second biggest smartphone maker ahead of Apple, sold 206 million smartphones in 2018, compared to just over 150 million in the previous year.

Huawei’s consumer business group said the handset is the first in the world to support standalone and non-standalone 5G networks and its downloading peak speed can be 10 times as fast as 4G smartphones.

Ambassador Hu said Huawei was not the only company in China that unveiled the 5G phone but also ZTE with their world’s first smartphone with 5G technology.

With a download speed of up to 1 Gbps per second, the phone is powered by a Qualcomm Snapdragon 835 processor that features an integrated X16 LTE modem and represents an important step for 5G technology. The Ambassador said.

“The phone “marks an important cornerstone for the 5G mobile era, as it will lead to a new world of mobile experience with 360-degree panoramic VR video, instant Cloud storage, entertainment upgrades and fast cache of ultra Hi-Fi music and movies.

ZTE is a leading global provider of telecommunications equipment, networking solutions and one of the world’s fastest growing smartphone manufacturers. Ambassador Hu averred.