As part of deepening the bi-lateral relationship between Sierra Leone and the People’s Republic of China, the Chinese Ambassador to Sierra Leone, His Excellency Hu Zhangliang has on Thursday 17th October, 2019 awarded 45 scholarships to students and pupils from different institutions under the 2019 Chinese Ambassador Scholarship Awarding ceremony. The event took place at the Chinese Embassy on Spur Loop, Wilberforce in Freetown.

In his address, His Excellency, Hu Zhangliang, said that since 2015, the Chinese Embassy in Sierra Leone has established the Chinese Ambassador Scholarships geared towards encouraging students with outstanding academic performances and support those with financial difficulties. “We hope this could help relevant students better conduct their studies and finally be able to contribute to the social and economic development of Sierra Leone,” he underscored.

He said that two weeks ago, the Chinese Embassy in Sierra Leone held a grand reception in celebration of the 70th Anniversary of the founding of the People’s Republic of China and friends from all walks of life both in China and Sierra Leone celebrated the event in a solemn and warm atmosphere, revealing that the Embassy is holding another Awarding Ceremony of the 2019 Chinese Ambassador Scholarships and hold an Embassy Open House Day with a view to further promote China-Sierra Leone friendship and friendly cooperation.

He added that the Chinese Embassy also displayed an International Photo Exhibition celebrating the 70th Anniversary of the founding of the People’s Republic of China to showcase China’s development in the past 7 decades. He disclosed that this year marked the 48th anniversary of the establishment of diplomatic relations between China and Sierra Leone, noting that over the past 48 years, China and Sierra Leone have achieved fruitful cooperative results in various fields, among which education is an important component.

He said that Sierra Leone enjoys the reputation of been regarded as the Athens of West Africa and the Sierra Leonean Government and people have always attached great importance to education.

He said that China has been trying her best to contribute to the “Free Quality Education” flagship program proposed by H.E. President Julius Maada Bio, adding that the Chinese Embassy in Sierra Leone bade farewell in August this year to nearly 120 Sierra Leonean students who were enrolled by  Chinese Universities under the Chinese Government Scholarships Program.

“To date, a total of 73 students have benefited from the Chinese Ambassador Scholarship program, including the 25 to be awarded scholarships today. I will also provide grants to 20 economically less privileged students at Fourah Bay College Junior Secondary School and an additional 2 students,” he further disclosed.

He said the scholarship recipients were mainly recommended by Fourah Bay College, the Institute of Public Administration and Management (IPAM),Njala University, University of Makeni, the Milton Margai College of Education and Technology, to which the Ministry of Technical and Higher Education especially Hon. Minister Gbakima offered valuable support and important guidance, adding that the 20 recipients of the grants were recommended by Fourah Bay College Junior Secondary School, and supported by the Ministry of Primary and Secondary Education.

Minister of Technical and Higher Education, Prof. Aiah Gbakima, expressed appreciation to the Chinese Ambassador for the kind gesture which he considers to be very important in helping the students to learn.

He said that as a Government they are very grateful for the support the People’s Republic of China has been giving especially by setting up the Chinese Ambassador Award, adding that the People of Sierra Leone are really grateful to China for contributing towards the building of Sierra Leone.

He admonished beneficiaries to make good use of the opportunity further urging them to desist from examination malpractice as, he said, it will hinder them in the future, adding that as a Government they are committed to providing quality education for all Sierra Leoneans across the country. He encouraged them to take their studies serious as education is the key to success.

Abdulai Y. Marah, a Civil Engineering student at Fourah Bay College, who is one of the beneficiaries, thanked the Chinese Ambassador for the offer which he said is not only important but timely.

He noted that since the establishment of the bilateral relationship between the two countries there have been great rewards accruing to the two nations.

The Ambassador highlighted how the Chinese have been helping in the development of different sectors in the country referencing the medical sector, infrastructure etc.

“These scholarships that have been awarded to us is an opportunity that will help us achieve our desired dreams of being educated and empowered for sustainable impacts which resonate with his Excellency President Maada Bio agenda of developing the human resource for the viable development of our beloved nation,” he maintained.

He congratulated his colleagues who were fortunate to bag the scholarships and admonished them to make good use of the opportunity so far offered. 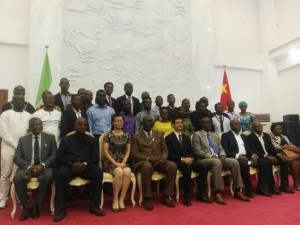 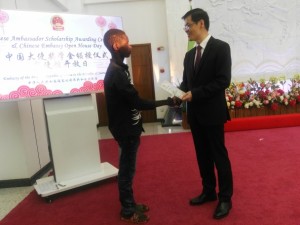 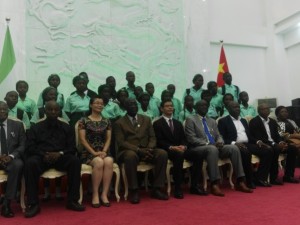 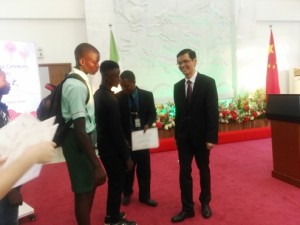