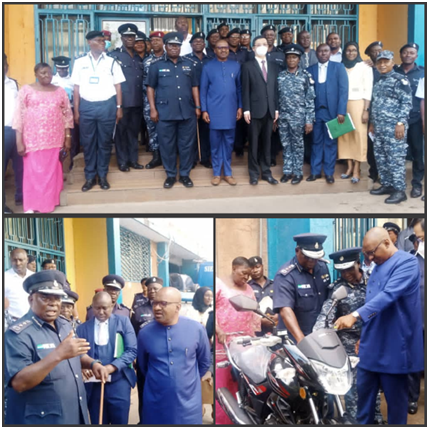 His Excellency Hu Zhangliang, the Chinese Ambassador to Sierra Leone has on Tuesday the 14th June 2022, through the Vice President of the Republic of Sierra Leone, Dr. Mohamed Juldeh Jalloh, donated ten (10) Motorbikes to the Sierra Leone Police.

Ambassador Hu Zhangliang ,in his statement, said that both the Chinese and the Sierra Leone Governments have been in a bilateral relationship for fifty two (52) years now adding that it will continue to blossom. He continued by giving thanks and appreciation to the Sierra Leone Police especially under the leadership of IG Sovula for the peace and security the country continues to enjoy.

The Vice President, Dr. Mohamed Juldeh Jalloh stated that fighting crime requires so many resources pointing out that one of the key resources the Police need to increase their operational capability is mobility asset.

He furthered that, “the Government is going to continue to buy more vehicles and bikes, and that the donated bikes should be used for the rightful purpose which will help to make work easier for the Police because there are some places especially in the provinces where vehicles cannot reach but with these bikes those places can be reachable”.

In an interview with the Inspector General of Police he was appreciative of the donations made by the Chinese Ambassador and stressed the need to ensure that the bikes are used for the intended purpose. He acknowledged that provision of mobility to enhance the work of the SLP is the responsibility of Government.

He therefore called on the end users to take very good care of the bikes and not using same as their private properties.