The Sierra Leonean businessman, entrepreneur and philanthropist, Alimu Sanu Barrie, who also doubles as the Chairman and CEO of Pavi Fort Construction Company, Sierra Leone, is currently engaged on improving the condition of the road stretching from J-Matter, Ferry Junction to Bomeh in the East End of Freetown with many praising the company for doing what they have termed as a fantastic work.

As a highly recommended company, with Alimu Barrier, as its very result oriented Chief Executive Officer, which has to its credit both national as well as international acclamations and recommendations for acceptable completion of standard design and completed road works, has again exhibited craftsmanship and professionalism at J-Matter, Ferry Junction to Bomeh, in the East End of Freetown as currently the company has gone far in its construction work with the spread of the first coating of asphalt with the current installation of State of the Art street lights and a traffic light.

With World Bank funding, geared towards the implementation of the Integrated Resilient Urban Mobility Project (IRUMP), as part of the implementation process by the Ministry of Transport and Aviation, the contractor of the road expansion and upgrading of a 400 metre stretch, Pavi Fort SL, has really demonstrated that local content should be prioritized as opposed to the past when it was deemed that only foreign companies could deliver in that regard.

Out of the plethora of comments received during a random survey, the company’s impressive past performances and immense professionalism were highlighted, commended and according to a school of thought has placed it at a vantage position to be awarded contracts, as it is now implementing geared towards improving road safety at Ferry Junction as well as enhancing institutional capacity in the transport sector.

Expertise by Pavi Fort at Ferry Junction is evident in the widening of the road from a two lane to three lanes on both sides.

Very spectacular at the moment is the installation of street lights and a traffic light at the intersection of Ferry Junction with work stretching from J Matter to Bomeh, which it has been underscored by experts, will largely enhance safety and ensure speed.

Indeed, many have expressed delight predicating such on the installation of state of the art street lights, improved security at night and reduction in crime rate as well as enhancing public beautification.

In a recent visit by officials of the World Bank, Pavi Fort was highly acclaimed for the construction work they have so far executed in that axis ,praising the CEO, Alimu Barrie, for the high display of expertise.

The World Bank was not the only one that heaped praised on Pavi Fort as even the Financial Secretary, Sahr Jusu, who was also present on that day, was highly impressed and could not mince his words of praises.

From interviews conducted, completion of  the project will  allow the Ministry of Transport and Aviation and its respective Agencies to achieve comprehensive corridor improvements that will cover complete traffic management measures including intersection improvements, coordinated traffic lights, improvement of sidewalks for pedestrian movement, drainage etc.

It must be reiterated that the work entails re-gravelling works, covering a 400 metre stretch from J-Matter around the Dockyard axis to reach as far as the Bomeh axis, in the East End of Freetown.

Already, the company has spread the first coating of asphalt on the surface of the road, said to have been constructed forty years back, to bring it up to 10 cm from the previous 5cm and that involve three layers.

The company has also expanded the road from two lanes, on both sides, to three lanes, fixed a new drainage system to replace the old small clogged ones which will curtail or drastically reduce flooding on the road during the rains, made provision for a traffic light to be fixed at the J-Matter, Ferry Junction to Bomeh intersection to control the traffic flow which will eliminate the presence of Traffic Police Officers and SLRSA Wardens, made provision for street lights , guard rails to be fixed as well as convenient bus stops or parking spaces.

Though, inevitably the construction work is posing certain inconveniences to road users, however, for now or at this material moment the speed at which the company is undertaking or moving forward with the work, according to research conducted by this medium, continues to impress many pedestrians as well as motorists, as captured from their comments all cumulating into commendations for the Government for coming up with the initiative to be funded by the World Bank.

The Chairman of one of an Ataya Base within the construction site, Nkawo Douglas, in an interview stated that Pavi Fort is really on top of the construction work maintaining that the company provided job opportunities for most of the youth who were hitherto jobless, has improved the road furthering how they have a very cordial relationship with the company. 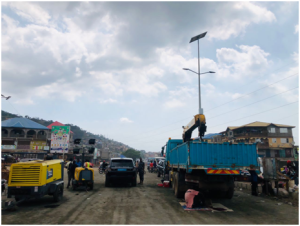 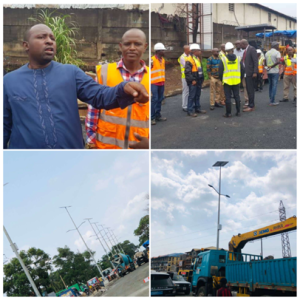