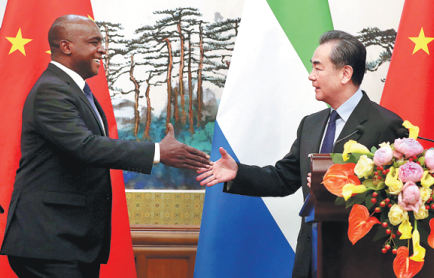 Sierra Leone’s Minister of Foreign Affairs and International Cooperation, Alie Kabba was warmly welcomed by the State Councilor and Foreign Minister Wang Yion on Friday 11 January 2019 .The State Councilor hailed the joint course of justice between China and Africa on Friday. Alie Kabba happens to be, the first foreign envoy China has received this year.
The two met at the Diaoyutai State Guest House in Beijing.
State Councilor and Foreign Minister Wang maintained that China and Africa have a connected future and shared destiny, and both are devoted to a course of justice that has won the support of people from developing countries.
It was highlighted that conditions are favorable for positive China-Africa relations, with the Beijing Summit of the Forum on China-Africa Cooperation and the joint building of the Belt and Road Initiative. “But relations face headwinds in the form of unilateralism and protectionism,” he said.
Wang added that pushing the development of the global governance system in a more fair and reasonable direction is the joint responsibility of China, Africa and developing countries.
“We need to demonstrate to the International Community the strength of unity and jointly push forward the development of China-Africa relations,” he said.
Wang wrapped up his five-day visit to Africa a few days ago－a continuation of a tradition established in 1991 of Chinese foreign ministers choosing the continent for their first overseas trip of the year. He noted that Kabba choose China for his first foreign visit this year.
“It shows the close friendship between our two countries and between China and Africa. It also indicated that we both make each other a priority in diplomatic relations,” he said.
Wang pointed out that China extended a helping hand to the West African country after it was struck by Ebola, and the two countries conquered the raging epidemic hand in hand, which cemented the brotherhood between the two nations.
He furthered that no matter how the international landscape changes, China and Sierra Leone have remained sincere friends, offering each other equal treatment and support since the two sides established diplomatic ties half a century ago.
Wang called on the two sides to ensure the implementation of the consensuses reached between State leaders, to maintain high level exchanges, enhance mutual political trust and continue to offer mutual understanding and trust on issues related to each other’s core interests and major concerns.
The two sides should work together to ensure the implementation of cooperative programs in areas including infrastructure, medical care, agriculture, fisheries and education, he said.
He also called on the two sides to step up strategic coordination on international affairs, safeguard the joint interests of both nations and developing countries and enable the international order to develop in a more fair and reasonable direction.
Kabba characterized China as a trustworthy, long-term cooperative partner of Sierra Leone. He said Sierra Leone adheres to the one-China policy and has always made relations with China a priority.

The Foreign Affairs Minister expressed thanks for China’s assistance in the social and economic development of Sierra Leone, adding that the country is ready to learn from China’s experience in governance.
China’s Vice-President Wang Qishan also met with Alie Kabba on Friday.