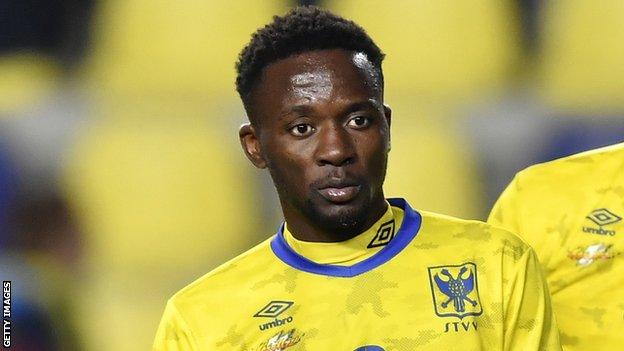 One of Sierra Leone’s best striker Mohamed Buya Turay has vowed that he will never play again in Belgium after after Sint-Truidense loaned him to Swedish club Djurgadens.

Turay who is 24-year old joined Sint-Truidense on a three year deal for a then club-record fee just five months ago from Dalkurd FF in Sweden.

He only played 163 minutes in six appearances in Belgium scoring on his debut against Lokeren in August.

“Based on what I have experienced at Sint-Truidense for the five months I have decided not to play again in Belgium,” Turay informed..

“I feel disappointed because things didn’t go the way I was expecting for reasons I can’t talk about.”

“Things changed after I scored my first goal for the club on my debut. Since then it was either I was on the bench or not on list for matches.”

Turay’s comments come despite his contract with the Belgian side running until 2021.

He had been hoping that Belgium would be a chance for him to further showcase his talent.

“I was expecting to be given the chance to do great things and move to bigger leagues but it wasn’t meant to be,” he explained.
“But God does things for reasons and I believe I have a brighter future,” he added.

The forward is hoping he can replicate the good form he showed during his previous spell in Sweden with Dalkurd.

“I’m happy to join Durgaden. I decided to come back to Sweden to re-start my career with the aim of moving to bigger European clubs in Europe,” he explained.

“But let me repeat I’ll never again play in Belgium.”

Turay netted nine goals in 13 appearances for Dalkurd in the first half of the Swedish season last year.

Before that he played for AFC Eskilstuna for three seasons helping them to promote to the top league in 2017 as well as Vasteras in the third tier.

He has only made just one appearance for Sierra Leone so far, against Ethiopia in the 2019 African Cup of Nations qualifiers, a match that has since been cancelled by the Confederation of African Football.