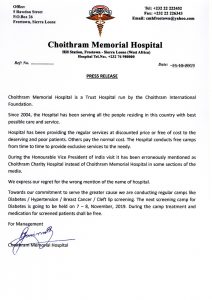 treatments for free, that is without any form payment, has been certainly proven, through sustained, incisive and detailed investigation mounted by this medium has indeed turned out to be completely false, baseless and totally misleading. The name of the hospital, Choithram Memorial Hospital is completely different from how some people misconstrue it to be the Choithram Charitable Hospital. It is as simple as that. Why all the fuss?

It must be noted at this particular juncture that the Choithram Hospital’s connotation of charity simply does not mean free in its totality as it is logical that without receiving any external support or assistance, financially or otherwise, it would be extremely difficult to operate a hospital of such a nature that offers first class medical treatments. How could members of staff be paid? How could Management procure medicines and other equipment?

According to the responsive Management official at the hospital, which has been rated as one of the best in the country as well as by other sources, the entity is run on a cost recovery basis having an outlined policy of admitting patients of all types regardless of their status in society. What this means is that they do admit patients who can afford to foot medical bills but most importantly the hospital also accommodates and treats patients who are so extremely poor to such an extent that they cannot afford to make any form of payment. Based on the information this medium accessed, all patients are accorded the same facilities as Management strongly frowns on discrimination.

“This hospital is supported by the Choithram International Foundation and does not in any shape or form receive any modicum of assistance from the Indian Government,” one of the hospital’s top Management hospital official intimated furthering how they are annually paying the sum of one million and five hundred thousand Leones (Le1.5 million) to the Government of Sierra Leone as lease agreement for the land where the hospital is situated on Hill Station in Freetown.

In justifying Choithram Hospital’s stance on offering qualitative medical treatments, it was divulged that there is a concrete arrangement bordering on annually bringing medical experts from Germany to undertake critical surgeries which most often turn out to be very successful.

It should be noted that just recently the hospital carried out twelve (12) successful heart surgeries for free which in a normal circumstance should have cost the patients fifteen thousand dollars ($15,000) each if the surgery should have been done overseas.

It will be recalled that Professor Thomas Crawford and team were in the country recently to follow up and evaluate patients who were implanted by the Choithram country team. Intra Cardiac Defibrillators were surgically implanted alongside the country team free of cost for patients who met the requisite indicators.

It could be recalled that in February 2018 a team of international cardiologists comprising Professor Thomas Crawford from the University of Michigan,Ann Arbor in the US and Professor Zaheer Yousef from Cardiff University alongside the Choithram team comprising Dr.James Russell and the hospital staff successfully implanted several Intracardiac pacemakers for the very first time.

In the wake of that major success the local team headed by Dr.Russell had successfully implanted several intracardiac pacemakers in Sierra Leonean patients who were suffering from bradyarrhythmia, a case of a very slow heart rate that requires treatment and the outcomes have been good.

Going down the annals of history a team of German pediatric surgeons in collaboration with Choithram Memorial Hospital have been conducting free surgeries in Sierra Leone on poor and needy patients below 18 years of age.

The surgeries, done under the umbrella of Bintumani-German Sierra Leone Society, started on the 8th of February, 2019 and ran up to the 23rd of February.

“On the first day, we did eight (8) surgeries and another nine on the second day,” said Dr. Ibrahim Al Naieb, one of the surgeons. “One of the operations was very complicated but it was very good we did it for the patient. We are hoping to perform surgeries on up to 100 patients and we are sure of doing all of them.”

This whole talk about the Choithram Hospital being a charitable entity and as such no payment should be made by patients emerged as a result of a statement made during the recent visit by the India Vice President when he stated that it is a charitable hospital. But this is a non-starter as it must be underscored that the real name of the hospital is Choithram Memorial and not Choithram Charitable hospital.

His statement was completely misunderstood and blown out of proportion  but the question that is on the lips of many well-meaning persons is how could a privately-owned and run hospital be sustainable in terms of offering high class medical treatments pro bono when it is not receiving any external financial assistance not even from the Indian Government?  The answer is simple: Sustainability of running the hospital will definitely be at stake. It must be reiterated that Choithram Memorial Hospital is an independent, privately owned entity devoid of any form of the India Government or any other partner’s assistance.

Apart from offering medical treatment the hospital is on record for dishing out scholarships and other supports to the needy all in the name of helping to alleviate poverty.

We need to get the facts right and stand up for the truth as it is only the truth that shall set all of us free.