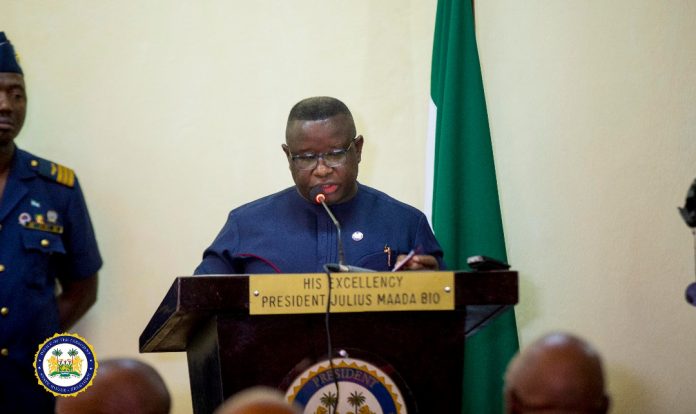 The fundamental principle of natural justice is the right of an accused to be heard in his/her own defense either by self or with the help of a lawyer.
For the next six months, the three judges heading the three Commissions of Inquiry will be sifting through documents and other evidences to know what transpired amongst officials in Ministries, Departments and Agencies (MDAs), in the execution of their official responsibilities.
President Bio has said he is keen to recover stolen money for use in the development of the country, a move that has been well received by the people and the International Community.
Well-meaning Sierra Leoneans are hopeful that the Commissions of Inquiry would help serve as deterrent against the reckless and brazen abuse of office by public officials to acquire ill-gotten wealth. But again, the fairer the process, the more credence it would get.

However, the now opposition APC members are raising concerns on issues bordering on evidences and are threatening not to cooperate, if those concerns are not addressed.
Whilst it is the right of the accused not to put in an appearance before the Commission, and one of the judges having stated that nobody will be compelled to appear, many legal minds have opined that it would be prudent for those summoned to respect the Commissions, as there are legal sanctions for not doing so.
However, it would be counter- productive on officials of the past regime to attempt snubbing the Inquiry should they be summoned, as there are enforcement measures in place, to institute compliance.
Where there was any doubt about the integrity and uprightness of the judges, Lawyer Charles who worked with one of them in the Law Officers Department has vouched that Justice Thompson is an independent incorruptible jurist; even though he, the Bar Association and some other concerned individuals and corporate bodies have called on the Government to heed to the APC’s concerns which the judges at the opening ceremony sought to allay by stating that they will be guided by established legal principles guiding Commissions of Inquiry in Sierra Leone..
We assume that Justice Thompson’s two other colleagues are of the same cloth as him.
Hon. Justices Biobele Georgewill, William Annan Atuguba and John Bankiole Thompson must not allow themselves to be influenced by opinions or claims posted on social media or articles written under the guise of Concerned Citizen, which could be baseless and malicious attempts to unlawfully implicate persons because of reasons listed above or else at the end of the day, posterity will not treat them kindly for wrongfully implicating people of corruption.
The three men must instead look at convincing elements surrounding a particular matter and use their legal experiences to arrive at a judicious conclusion, rather than on hearsay.
This is of great importance as the recommendations they as Commissioners would compile and present to the Government, would have far reaching implications in the lives of individuals named, and society as a whole.