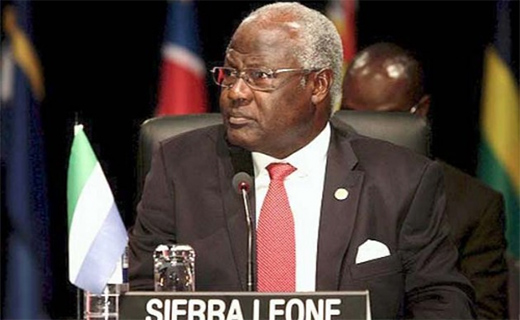 The three Commissions of Inquiry set up by President Bio to look into the activities of all former Ministers and their Deputies that served under President Koroma after receiving evidences from the Attorney General and her panel of assistant State Counsels in presenting the state’s case has now officially written to erstwhile President Koroma, Vice Presidents Sam Sumana, Victor Bockarie Foh, all former Ministers and their Deputies summoning them to appear before the Commissions.
The directive from the Commissions’ Secretariat asks all those invited to send to the Secretariat their current addresses and telephone contact numbers.
Last week Tuesday 29th January 2019 before the Commissions adjourned to today February 11th 2019, the State tendered witnesses from the Auditor General’s Office, the Cabinet Secretariat and the Government Printer.
In the main, the Attorney General and her team will try to convince with documentary evidences drawn from several sources, but mainly from the Auditor General’s Reports from 2007 to 2017 alleging that the former Government engaged in large scale theft of state properties, assets, resources and funds.
At the opening of the commissions, the Attorney General and Minister of Justice said the COI was established to combat impunity as waging war against corruption is a constitutional mandate enshrined in Sierra Leone’s Constitution.
She said information and evidence against a person of interest over a specific period of time from November 2007 to April 2018, will be presented and probing will be done on the activities of the President of the past administration, Vice President, Ministers, heads of ministries, departments and agencies and Board Chairmen of various institutions.
As such, the Commissions seek to inquire about governance systems, assets owned by former government officials, whether they are commensurate with their earnings.
With the All Peoples’ Congress stating that it would not subject itself to what Secretary General Ambassador Yansaneh called a kangaroo court, citing that it is not properly constituted and has no formal rules of evidence.
However, during their first sittings, the three judges sought to allay the fear of those that will be invited to face the Commission that they will go by the Sierra Leone High Courts Rules of 2007 as a guide in conducting the proceedings of the inquiry.
The judges noted that they took into consideration based on the contentions that they heard.
The judges also pledged that the hearings will follow the rules of natural justice and far hearings, in as much as the hearings would not be strictly bound by the rules of evidence as found in the High Court.
What however remains uncertain is whether the APC party will permit its former officials to subject themselves to the investigations as last week, the party filed a petition with the Supreme Court calling the court’s attention to lack of rules of evidence and also complaining violation of human rights.
Meanwhile, the nation is split between those who stand with President Bio in demanding for democratic accountability from officials of the former Government and those who maintain that the inquiry is targeted at discrediting APC and therefore deem it as a witch hunt.