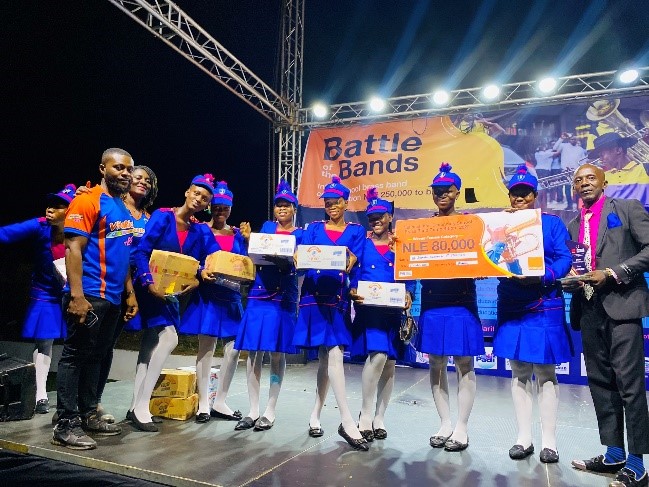 Cowbell, one of the brands marketed by Premium Divine Trading Company Limited, a food distribution company that operates as an agent for Promasidor Holdings, a leading distributor of quality food products in Sierra Leone has supported the grand finale of the 1st ever National Inter-School Brass Band Competition.

The 1st ever National Inter-School Brass Band Competition was launched on the 10th April 2021 by C&K Consultancy in partnership with one of the leading telecommunications companies in the country, Orange Sierra Leone at the National Stadium Main Bowl in Freetown.

Since the launch of the first ever inter Secondary School Brass Band Competition which is an opportunity for participating schools to show case the talents of the competitors and make their schools proud, various Secondary Schools  have been battling to ultimately arrive at the final outcome.

9 schools, which include the St. Joseph’s Secondary School, Vine Memorial School, Prince of Wales School,  Government Model School etc. made it to the finale.

After the nine schools competed in the grand finale competition St. Joseph’s Secondary School emerged as winner in the female category and they were awarded the sum of Eighty Thousand New Leones (Le80, 000).

All the top 3 schools in all the categories received cartoons of Associated Cowbell Products as consolation prizes.

He said that the Premium Divine is a quality food company and they are committed to ensuring that everybody enjoys good food.

Kenneth Konuah stated that Cowbell products come in 14g sachet, 20g sachet, 360g sachet and 400g tins for the milk.  Also, cowbell food drinks package sizes are 40gs for the Coffee, Strawberry, Coconut, Choco-Malt and Cowbell Mocha. They are all produced in Ghana by Promasidor Ghana Limited for export sales to some West African countries including Sierra Leone.

He used the opportunity to inform all that the Company also distributes and markets, Onga, Miksi Chocolate and coffee drinks, Xploza, Kremela, and Yumvita, the latter being an infant cereal with milk also containing wheat, rice, and maize.

The Country Manager stated that as a company they can guarantee the availability of quality food products for consumption by everyone with Cowbell products.

He concluded by appealing to all to always buy the quality food products of Premium Divine Trading Company Ltd especially Cowbell milk because it is enriched with all the necessary nutrients needed for growth in the family.