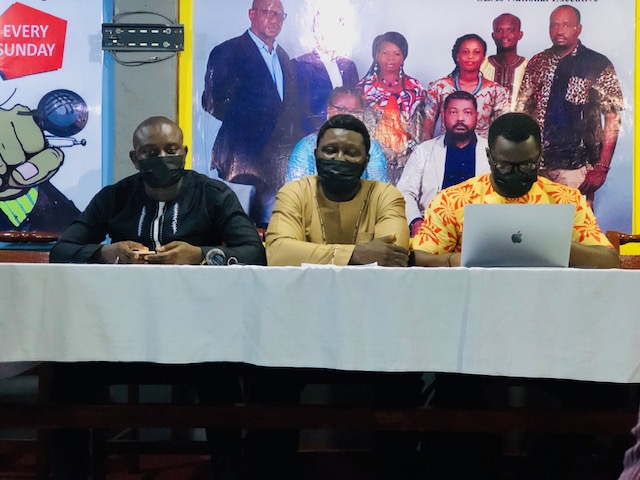 One of  the most outstanding Civil Society Consortium, comprising rights-based organizations with its key focus and commitment to promote the culture of democratic accountability, good governance, human rights, rule of law and socio-economic justice to ensure a transparent and accountable society in the country, the Consortium for Good Governance, Human Rights, and Democracy (CGHRD) has on Tuesday 3rd August, 2021 during a press conference held at the Sierra Leone Association of Journalists Hall on Campbell Street in Freetown raised concerns over the prolonged detention of Mohamed Kamarainba Mansaray who has been standing trial on the allegation of sexual penetration.

Speaking during the press conference, the National Coordinator of Consortium for Good Governance, Human Rights, and Democracy, Marcus Bangura noted that CGHRD has been closely following the trial of Mohamed Kamarainba Mansaray, Leader and Chairman of the Alliance Democratic Party (ASDP).

He added that while CGHRD acknowledges the fact that the matter is “sub judice” and its merits cannot be discussed out of court, they, however, wish to unequivocally state the following: that CGHRD fully appreciates the nature and sensitivity of the trial of alleged sexual penetration and that the trial has spanned over a year and no verdict has been delivered.

He maintained that Mohamed Mansaray remains innocent until proven guilty by a court of competent jurisdiction, noting that he has already spent over one (1) year in detention at the Male Correctional Center without bail on account of the aforementioned allegation.

He revealed that CGHRD is in possession of an Independent Medical Report by competent Medical Practitioners, certified by the Chief Medical Officer suggesting that Mansaray’s health status is gravely degenerating as the days go by maintaining how it is the considered opinion of CGHRD that the prolong detention of Mohamed Mansaray has the proclivity to endanger his right to life.

Marcus Bangura furthered that given his precarious/deteriorating health status, CGHRD is humbly appealing to the good conscience of the Honourable Judge presiding over the matter under trial to use his discretion judiciously and grant Mohamed Mansaray bail, pointing out that granting Mohamed Mansaray bail will not in any means suggest that the matter under trial has been closed.

He said, however, it will go a very long way to solidify public confidence, trust in the judicial independence and /or jurisdiction.

“In respect of the foregoing, CGHRD wishes to seriously emphasize the pressing need for our judicial system to always uphold, maintain, defend and promote the ideals of free and fair trial; irrespective of the socio-economic or political status of the persons involved,” he concluded.

Earlier, the Public Relations Office of the Consortium for Good Governance, Human Rights, and Democracy, Thomas Moore Conteh, noted that the consortium is a rights-based entity of likeminded organizations with key focus and commitment to promoting the culture of democratic accountability, good governance, human rights, rule of law and socio-economic justice to ensure a transparent and accountable society in the country.

He also reiterated that they have been closely following the trial of allegation of sexual penetration involving Mohamed Kamarainba Mansaray and as consortium had hold their peace in commenting on the matter over a year now, but that the consortium deems it fit to comment on the said issue because of the nature of the matter that has to do with rights.

Thomas Moore disclosed that that the prolonged detention of Mohamed Mansaray could be tantamount to a violation of his right stating how they will continue the mount campaign for him to be granted bail.