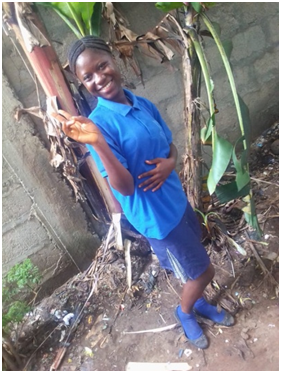 13-year-old Fatmata Soriba, a JSS 3 pupil of the David Arnold High School, Old Wharf in Freetown was stabbed to death on Wednesday, October 26 at their Davies Street residence, up Congo Water by thieves. Congo Water is an area notorious for thieving, stabbing and lawlessness within the Wellington Community. Poor Fatmata Soriba is the only daughter of Mohamed Alfred Soriba, who is also a teacher at David Arnold High School.

Explaining the circumstance leading to the death of his daughter, Mr. Soriba said she lost her life to thieves who broke into their premises at around 3: am that fateful night. He said the thieves forced their way into their apartment located at the extreme end of the compound of about six other adjoining apartments.

“They broke open the door and carted away everything and also killed my only daughter,” Teacher Soriba explained in sobs. He said he suspected a deliberate target against his family. “It is a very big compound with a long apartment building and I and my family live at the extreme end so I don’t know why I was singled out for attack.”

According to him, the thieves methodically skipped the other blocks to target his household for the ransack and gruesome murder of their daughter. He said the sound of the thieves carting away their loot awakened the poor girl who gave a spontaneous shout to alert the other family members. “She was promptly silenced by one of the intruders who pushed a knife deep into her neck as they fled, and before we could realize anything, she was in a pool of blood, lifeless.”

Mr. Soriba continued that the thieves succeeded and they escaped clean. He said the intruders can likely by residing within the same area and know the family so they wouldn’t want to be identified at dawn for which they targeted the little girl.

Not too far ago, about a month, a similar atrocity was visited on my household. Our three-roomed apartment at New Stead Lane, within the same Congo Water community, was broken into and ransacked, carting away several items. This ugly phenomenon is becoming a cause for concern and certain community people seem protective of the miscreants as people see thieving very normal in that part of the city.

Also, this is a very deprived, dirty and drug-infested area with addicts serving as willing recruits to perpetrate mayhem against peaceful citizens whenever the situation arises.

Residents are therefore calling on the leadership of the Sierra Leone Police to pay great attention to the Congo Water area in Wellington by increasing personnel presence and regular patrols.