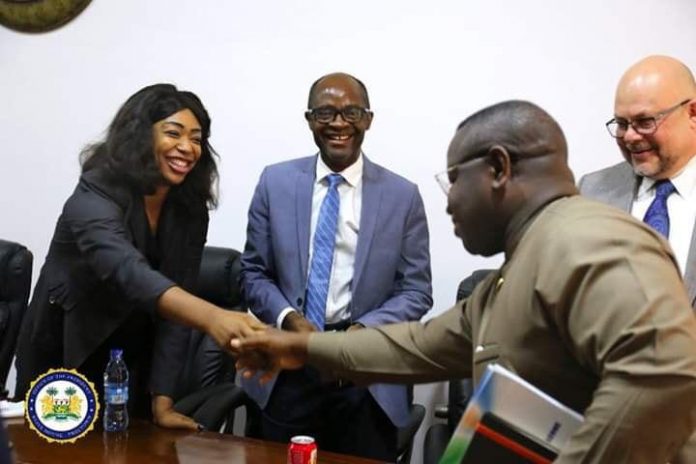 During a short but impressive program the Chief Minister, Professor David John Francis, presented the Green Paper of the proposed Independent Commission for Peace and National Cohesion to His Excellency President Julius Maada Bio at State House.

Presenting the document, the Chief Minister said it was important that he submitted to the President the paper that would eventually help achieve inclusive governance and improve on the infrastructure for peace and democratisation.

“Your Excellency Sir, on 10th May 2018, during your maiden address to Parliament, you promised to build the blocks of unity and national cohesion. This Green Paper is a step to achieving that dream and it will help consolidate a nationwide consultation with every Sierra Leonean and make them a part of the peace process in the country. This Paper will also usher in a Cabinet White Paper that will be endorsed before it goes to Parliament to become a law,” he said.

The United Nations’ Resident Coordinator in Sierra Leone, Mr. Sunil Saigal, thanked the Government of Sierra Leone for their bold step in pushing for a Peace and National Cohesion Commission, adding that the United Nations supported the Green Paper and its contents.

Hawa Samai, a Sierra Leonean based consultant, thanked the Government of President Bio for pushing for peace and, in particular, for taking a Sierra Leonean as a consultant to produce the Green Paper for the proposed Independent Commission for Peace and National Cohesion.

She disclosed that the process and the document looked into the root causes of violence, with special attention on the Truth and Reconciliation Commission Report. She further stated that they were able to discover that the lack of justice, corruption, greed, tension during political periods, lack of basic social amenities were all major causes of violence in the country.

“This Green Paper is a result of a consultative and an inclusive process that was done with the highest amount of sincerity. We have ensured that every question, that has the tendency to trigger violence in the country, is answered here in this Green Paper. And at the end of the day, there is a clear roadmap that shows that there should always be a National Dialogue across the country,” she explained.

Receiving the Green Paper from the Chief Minister, President Maada Bio thanked all those who participated in the production of the report and added that it was timely for the country to come together for the better.

“We cannot overemphasise the importance of peace in this country. We have gone through a very difficult time during the 11 years’ civil war, and never again should it happen in this country. There should be a collective effort in the eradication of corruption and all other elements that have the tendency to put us apart as a nation. We must put this country together and that is our individual and collective responsibility as a nation. We have to agree on where we want to go,” he said.

President Bio also told the gathering that he was happy because the efforts leading to the presenting of the Green Paper was extensively consultative, noting that that was important. He maintained that people would love to see people from all walks of life in the country take part in putting together an infrastructure that would help deliver on the peace of the country.