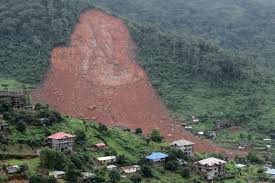 The role of forests in climate change resilience was discussed by the Center for International Forestry Research. Frances Seymour, CIFOR Director General said, “It is urgent to safeguard Africa’s forests, not only because they slow climate change but also because they act as a final barrier to creeping desertification, underpin sustainable agricultural production and support the livelihoods of tens of millions of the rural poor”.

In a previous editorial commentary, The Calabash called on the newly created Ministry of Environment, working in partnership with other line ministries and agencies, to as a matter of urgency put in place policies, strategies, measures and practices to curb the frightening rate at which our forests are disappearing due to causes that were out lined.

Last Friday the NGC leader in Parliament, Dr Kandeh Yumkella raised concern about the devastating impact of on-going timber logging and deforestation in Kailahun, Kono, Koinadugu, Falaba and Karene districts. He raised the issue after recent visits to some of these vulnerable locations in Kamakwie, Fintonia, Samaya, Kuru, Tanenneh, and Sanya, in the Karene District.

What is most times missing in Government action is lack of effective implementation of policies. The NGC leader recalled that over the issue, the Speaker of Parliament invited environmental groups to Parliament to explain the extent of deforestation on the nation.

Needless to say, given the extensive damage done to the country’s environment by shifting cultivation farming, logging and clearing fort new settlements, the Government and its development partners need to take urgent action to mitigate the deforestation of the country’s forest reserves.

The obvious medium to long term solution is for the Forestry Division of the Ministry of Agriculture working in tandem with all the 16 local councils and the 192 chiefdoms to protect the remaining forests and to plant trees in developing a sustainably viable forest and its products industry countrywide.

Generally, deforestation is accelerating across Africa, killing wildlife and weakening the ability of the continent’s ecosystems to withstand climate change, especially in the area of food security.

Thus, the reason why Government must take very serious remedial actions to save and propagate our forests stems from the observation by Global Security that Sierra Leone has been ranked as the third most vulnerable nation after Bangladesh and Guinea Bissau to adverse effects of climate change.

Of note is that vulnerable populations have low capacity to adapt to climate change; with the rural populations the most affected because of their high dependence on rain-fed agriculture and natural resource-based livelihoods.

As such, we must also be reminded of the threats that climate change poses, particularly to developing nations. South Africa’s Minister of Agriculture, Forestry and Fisheries, Tina Joemat-Pettersson, noted that, “Climate change threatens to undermine many of the development objectives of countries in Africa and in the rest of the developing world, in particular in the areas of water, energy, health, agriculture and forestry.”

As such, it is high time the Government of Sierra Leone and its development partners put this urgent all-encompassing development matter on the front burner in the designing and implementation of all rural development policies, programs and projects.