In a very interesting emerging episode, some officials of the Tertiary Education Commission together with a team of OSD and CID personnel stormed the Kissy Town community in Waterloo where a certain fake University called Dominion Christian University was conferring fake Honorary Doctorate degrees to Sierra Leoneans.

According to sources within the Police, the CID personnel were intimated about the illegal activities of the said University and were promptly deployed.

The Police were able to arrest Prof. Ezekiel Bangura and several others who are currently helping the Police.
The Police have therefore issued a warning to Sierra Leoneans to be aware of the fake institutions and their fake PhDs.

A Press Release from the Tertiary Education Commission reads:

The Tertiary Education Commission is seized of the unveiling situation involving the illegal Dominion University.

The Commission, working in collaboration with the Police Force, is handling the matter. The Proprietor and other staff members are currently detained by the CID since 1st April 2022, helping with the investigations as to how a convocation ceremony was held on 26th March 2022 in spite of advice from both the Police and TEC not to go ahead with the ceremony as the Institution is not a legal entity. A Press Release by the TEC was issued on 19th March 2022, published in the Print, electronic and social media advising the Public to dissociate itself from any such degree awarding ceremony.

The Initial proposed venue which was under surveillance by the Police was abandoned and a secluded backyard of a dwelling house was used instead.

Please be assured that the Police and TEC are leaving no stone unturned until the perpetrators are brought to book.

The public is warned that the degrees awarded are of no effect and are not recognized in Sierra Leone.

According to Alhaji U Njai, maybe we should all just buy PhDs, legalize cheating in schools and academic fraud, fake our way to positions in society, and in that way, we save big time on educational investments, and bypass all the daunting requirements for hard work, integrity, ethics, and excellence. Maybe we should just accept it as who we are, what we have become in 60 years, and how we have perceived success. Maybe this is what we truly are, a society where mediocrity is rewarded and promoted, and excellence marginalized. So why do I have to do the right thing, when the basic tenets of integrity, hard work, honesty, and excellence does not matter anyway. Those who cheat still get ahead and are rewarded in the system. 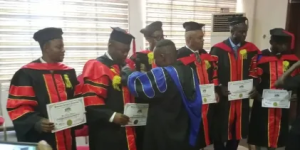 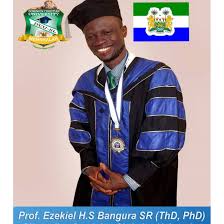 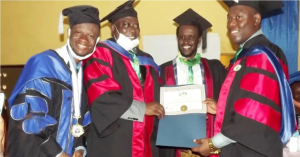