As part of their support towards the fight against the coronavirus in the country, the Sella Development for Education and Progress (SeDEP) with support from Fomel Industry and National Industrialization Centre (FINIC) on Friday 15th May, 2020 donated Personal Protective Equipment worth millions of Leones to the Government of Sierra Leone through the Karene District Covid-19 Response Team, which includes 4 Milla Hand washing machines with accessories (2,000 Liters each), Bags of Soap, Hand Sanitizers etc. at a ceremony held at the Kamakwie Community Centre in Karene District.

Presenting the items on behalf of the organization, Chairman of the Sella Development for Education and Progress (SeDEP) Kamakwie Chapter, Joseph Bangura, applauded the Karene District Covid-19 Response Team for their tireless effort, adding that Karene District still remains one of the districts in the country that has not recorded a single case, even though neighbouring Falaba and Koinadugu Districts have recorded positive cases of covid-19.

He said that as a responsible organization they thought it fit to make this donation on behalf of the President of the Organization, Abdul A. Bah and the entire membership and that they are doing so with the strong belief that such could be helpful, especially at this decisive moment.

Bangura stated that the gesture is a clear manifestation that SeDEP cares for the people of Karene District and the nation as a whole, pointing out that they are ready to make all sacrifices in order to contribute to the socio-economic development of the nation.

He also admonished all to strictly practice what the Government, through the Ministry of Health and Sanitation and other stakeholders have put together in terms of the protective measures in the fight against the virus.

Receiving the items, District Medical Officer Karene District, Theresa Dawoh, expressed appreciation to the Sella Development for Education and Progress (SeDEP) for the donation, which she described as a timely intervention in the fight against covid-19 in the District. She noted that Karene District still remains one of the Districts that has not recorded any covid-19 positive case, adding that the fight against covid-19 in the country needs collective effort among citizens and also called on all to adhere to all the preventive measures like Hand Washing, social distancing and the use of face masks, which are very key in order to curtail the spread of the coronavirus.

Representative of the Ministry of Social Welfare in Karene District, Joseph Turay, also applauded the effort of SeDEP for the gesture, adding that if not for the intervention for SeDEP, Milla Hand washing machines with accessories would not have reached Karene District. He said that they are working tremendously to ensure that Karene District did not record any positive case, but said this will only be achieved when all hands are on deck, and he encouraged all to adhere to all the preventive measures. 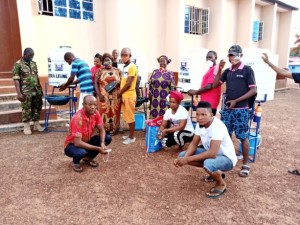 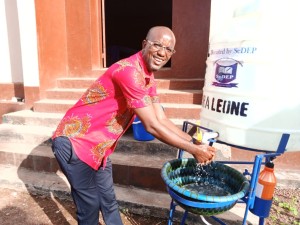