A panel discussion, which took place on the 21st June, 2022 at the Sierra Palms Hotel in Freetown, on the topic: “Economic Reforms for a Quick Recovery from COVID-19”, was moderated by Dr. Yakama Manty Jones nee Marah, an Economist, Researcher, Lecturer, Entrepreneur and Philanthropist who is the Director of Research and Delivery at the Ministry of Finance.

During the panel discussion session, when Dr. Yakama Manty Jones nee Marah,  asked the Deputy Governor of the Bank of Sierra Leone, Dr. Ibrahim Stevens that just when the economy began to recover, the war in Ukraine caused new disruption through sharply higher food and fuel prices and what is the Central Bank doing to cushion the impact of high inflation?

In his response, Dr. Ibrahim Stevens said at a practical level they have done quite a lot as a central bank since the COVID-19 outbreak and after its spread was checkmated in order to make the nation grow again, but stated that unfortunately the Ukraine war came and the war  brought its own consequences.

He continued that policies were implemented  to ensure that we could import the  necessary essential commodities stressing how they have been doing that but said even that in itself is  insufficient.

The Deputy Governor said there has to be other actions that the Ministries of Finance, Trade and Agriculture should be implementing in order for the country to produce more, maintaining that if we could reduce the country’s import bills then the nation will be able to address the challenges especially that of generating Forex all the time. He furthered that we should not only focus on agriculture but we should also think about industrialization.

Responding to her question that after steadfast fiscal management had reduced the fiscal deficit to 3.1 percent of GDP in 2019, the deficit jumped to 5.9 percent in 2021, reflecting a combination of higher expenditure, revenue shortfalls and tax-deferring policies to respond to the pandemic what is Ministry of Finance doing to reduce fiscal deficit and improve fiscal sustainability,the Deputy Minister of Finance, Sheku Bangura, stated that they have been dynamically trying to manage the economy by using various strategies.

He said they have been targeting different beneficiary groups that need to be considered and conducting researches to see how the Ministry can make policies that will be used to respond to certain issues. And one of the things he mentioned was digitization adding that the Government is forward thinking and working on ways to drive efficiency.

Stating that the Report calls for improved financial access for SMEs and how can the Government facilitate that access? What steps have been taken thus far? Sheika Sannoh said it is time for Government to establish Development Banks that will cater for SMEs for medium and long financing. He continued that Sierra Leone lacks sector specifics suggesting that the Government and the Sierra Leone Commercial Bank should develop sector specific SMEs product. Thirdly, he said Government should focus on mechanisms that can add value to SMEs that has growth potentials.

Dr Yakama laid the basis for Mahmoud Idriss, the CEO of Smart system that the Report found that around 88 percent of SMEs reported a decline in sales during the pandemic, often closing operations and laying off staff – which aggravated their pre-existing constraints of access to finance, land, and infrastructure and then asked: How has the private sector and SMEs in particular navigated those shocks/challenges?

Mahmoud Idriss started by saying their survival depended on adaptability and circumvention, by finding ways to navigate and through what he termed as reincarnation.

The panelists also specifically proffered how to leverage SME financing and digitization for inclusive growth.

The responses by the panelists to the current crisis included paths to improve resilience and reducing poverty. What all the panelists agreed on was that as a nation we must be more intentional about private sector development within both the formal and informal sectors.

Some of  the measures they proffered  included financial literacy and business development support,  greater access to finance, women’s entrepreneurship, ecosystems  strengthening and value addition, digital financial literacy and inclusion; thinking and working through the last mile, implementation of policies with all parties and above all the aforementioned must be complemented by measures to support macroeconomic stability.

It must be noted that the 2022 Sierra Leone Economic Update stated that the country’s economy had begun to recover from the COVID shock, but it is now faced with renewed uncertainty.

It continued that following economic contraction in 2020, growth had resumed, driven in part by iron ore mining but maintained that the growth outlook now faces renewed uncertainty, against the backdrop of the Russia-Ukraine war, global inflationary pressures, and the continued threat of COVID outbreaks.

The Update also stated that after expanding by 5.7 percent in 2021 (the strongest post-recession recovery in about 80 years), global economic growth is now expected to moderate to 3.2 percent in 2022, and 3.1 percent in 2023 reflecting hikes in critical food and fuel prices caused by Russia-Ukraine war, adding to existing inflationary pressures stemming from lingering supply bottlenecks and over-heating economies.

It further stated how Sierra Leone’s economy grew by 3.1 percent in 2021, after shrinking by 2.0 percent in 2020 and that agriculture contributed over half of total growth followed by services and industry. The Update pointed out that manufacturing was the fastest growing sub-sector, expanding by 12.3 percent in 2021 after contracting by 6.7 percent in the previous year, benefiting from Government’s support to small and medium-sized enterprises (SMEs) through the MUNAFA Fund and Bank of Sierra Leone’s (BSL) SLL500 billion special credit facility, as well as from increased agribusiness investments.

The report said public finances have deteriorated since the onset of COVID-19. It added that after steadfast macroeconomic management had reduced the fiscal deficit to 3.1 percent of GDP in 2019, the deficit jumped to 5.9 percent in 2021, reflecting a combination of higher expenditure, revenue shortfalls and tax-deferring policies to respond to the pandemic.

Also, it went forward to say public debt has risen steadily in recent years to reach 76.9 percent of GDP in 2021, the highest level in Sierra Leone since HIPC debt relief was obtained in 2008. The increase in debt reflects persistent fiscal deficits, currency depreciation, and limited access to concessional sources of financing.

It pointed out that increasing reliance on high-cost domestic borrowing has increased the debt servicing burden and crowded-out credit to the private sector. That inflationary pressures have accelerated since mid-2021, driven first by the post-pandemic rebound in consumption, and subsequently by global supply chain disruptions since the onset of the Ukraine war, and depreciation pressures on the Leone. External accounts, as the report claimed, have been cushioned thanks to international aid. 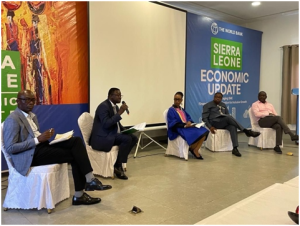