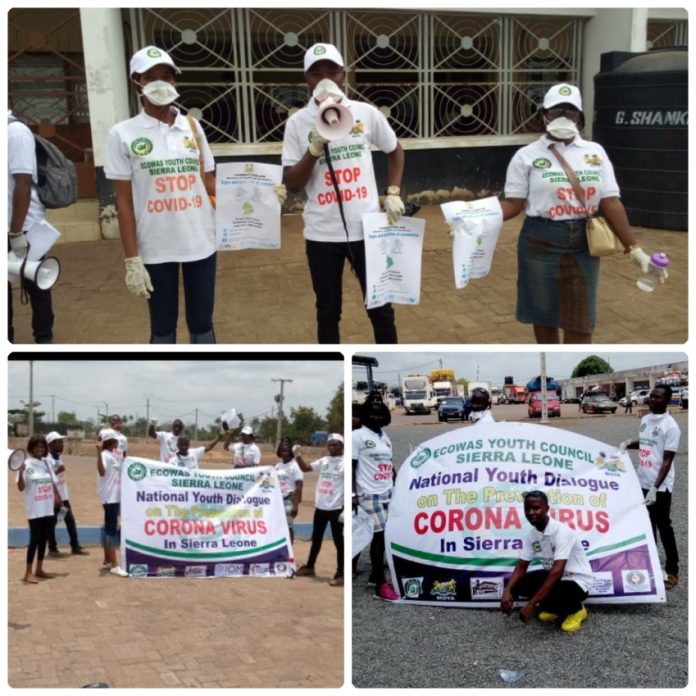 In a bid to complement the efforts of the Government to reach out to communities with preventive messages against the coronavirus, the ECOWAS Youth Council Sierra Leone Chapter on Friday 11th April 2020 concluded a 2 days outreach sensitization on the causes and prevention of the Corona Virus Disease (COVID-19) at Gbalamuya, a border community closer to Guinea in the Kambia District in line with their “Beyond Borders Sensitization Tour”.

In his address, President of ECOWAS Youth Council Sierra Leone Chapter, Amb Sheku Foryor, threw light on the establishment and operations of the organization further disclosing that it is a platform that gives young people the chance to discuss issues that affect their wellbeing for the attention Government

He also noted that the role of youth in the border areas vis-à-vis scaling up the fight against Covid-19 is very pivotal.

He noted that during the Ebola outbreak young people played critical roles in the fight against the outbreak, adding that the current sensitization drive is carried out as a way of complementing Government’s effort in the fight against CoVID-19 also highlighting that border communities are at high risk further calling on residents to adhere to precautionary measures.

On his part, the Chairman of the Kambia District Youth Council, Mohamed Alim Kamara, expressed appreciation to members of the ECOWAS Youth Council for taking the coronavirus awareness campaign to their district, saying it is timely. He encouraged all to observe the necessary personal hygiene messages that have been explained to them and to adhere to the directives of the Government. He also admonished them to follow the process of hand washing demonstrated to them as such will help to keep them alive and protect them from contracting the coronavirus.

He enjoined the people of Gbalamuya to take heed of the messages that have been given to them by the team, more especially young people who are mostly agents of smuggling around porous border areas, to adhere to other messages like early referral to the health Centre or calling of the 117 when someone falls sick.

Mariatu Sankoh, on behalf of the women of Gbalamuya, also expressed delight for the inspirational and encouraging messages from her peers about the consequences of contracting the coronavirus and the importance of taking ownership of the fight. She urged her colleagues to make good use of the messages.

In appreciation, the Customs Supervisor of the National Revenue Authority hailed the team at the Gbalamuya Customs Post and told members of the team that the entity is a joint border monitoring unit between Sierra Leone and Guinea. He also emphasized that they are working assiduously to ensure that the closure of the border is maintained as announced by Government.