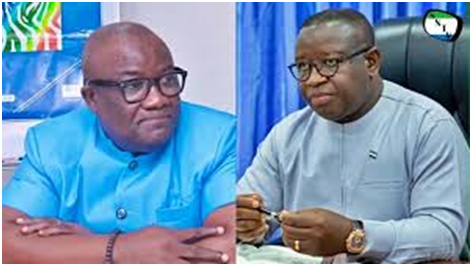 The Electoral Commission for Sierra Leone (ECSL) in a Press Statement dated 21st October 2022 has pointed out that in accordance with Section 38(A) of the Constitution of Sierra Leone, 1991 (Act No 6 of 1991) as amended in 2001, referencing Subsection 3 of Section 38 “the President may, after consultation with the Electoral Commission, direct that such election shall be conducted on the basis of the existing Districts in a manner to be known as the District Block Representation system instead of constituencies”.

According to the ECSL, on 19 October, 2022, the Commission held a consultative meeting with His Excellency, President Julius Maada Bio to update him on progress relating to the Boundary Delimitation exercise being undertaken by the Electoral Commission for Sierra Leone.

The Commission furthered that subsequently, on 20 October, 2022, the Commission received a correspondence from H.E. the President in which the ECSL was directed to use the District Block and Proportional Representation (PR) System, for the conduct of the June, 24th, 2023 multi-tier elections.

It continued that within that context, the Commission is hereby informing the public and key stakeholders that the 2023 multi-tier elections will be conducted using the PR System, and that the Boundary Delimitation exercise which had commenced is halted with immediate effect.

The ECSL stated that such is to facilitate effective planning on matters relating to procedures, rules, and regulations on the Proportional Representation System.

The Commission said it remains committed and compliant with its legal mandates and guiding principles and will keep the public and key stakeholders fully informed and engaged on this trend.