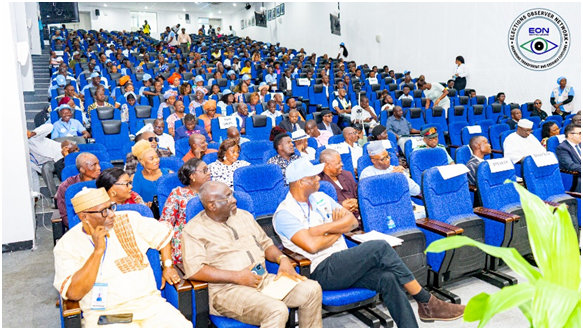 During a well-attended ceremony held on Thursday 17th November 2022 at the New City Hall Auditorium in Freetown, the Chairman Board of Directors of the Ahmed Kabbah Tejan Foundation for Peace and Democracy, Ambassador Dr. Mohamed Samura has officially launched the Elections Observer Network (EON-SL).

He said that elections observers networks like EON-SL are valuable conduits to improve the quality of elections and that they help build public confidence in the honesty of electoral processes.

Ambassador Dr. Mohamed Samura concluded by making a declaration of the official launch of the Elections Observer Network in the country.

The Elections Observer Network (EON-SL) is said to be a non-profit and non-partisan conglomerate of over one hundred organizations that advocate for peaceful co-existence, good governance, and respect for democratic processes and serving as a consortium.

In his welcome address, the National Coordinator of Elections Observer Network Sierra Leone (EON-SL), William Tucker said that EON-SL is a non-profit and non-partisan conglomerate of organizations that advocate for peaceful coexistence, good governance, and respect for democratic processes as a Consortium, adding that the mission of EON-SL is to work in partner-ship with organizations in Sierra Leone to support electoral processes in the country, with a vision of creating a democratic society where transparent and credible elections exist for the furtherance of Good Governance and Democracy.

The National Coordinator maintained that EON-SL is very committed towards supporting the Commission for the conduct of free, fair and transparent elections in the country.

He concluded his address by presenting a cross-section of the membership of the network of which he further asked political parties present to look at the members presented to them and make objection if they are not satisfied with any of the members.

She said that democracy is far more than elections, adding that the holding of transparent, accountable and credible elections is an important cornerstone of democratic processes in any country and that elections observers do make significant contributions in the process.

Josephine P.M. Panda stated that alongside political parties and the media, Civil Society is of vital importance towards enhancing democratic activities and that civil society groups and election observers can actively encourage the emergence of the popular and political will which is so vital for democracy in any society to thrive.

The Spokesperson for the National Grand Coalition, Nyamacoro Silla, said that regardless of the fact that people hold allegiance to their political parties but when it comes to elections she encouraged Sierra Leoneans to put the country first.

She said that elections are very trying times in the country of which she recommended that political parties or individuals should engage residents in communities with awareness raising on the need to put their country first rather than preaching negative messages.

The Spokesperson concluded by expressing appreciation for the launch of the Elections Observer Network (EON-SL) in order to advocate for peaceful co-existence, good governance, and respect for democratic processes in the country.

The Deputy Leader of the Sierra Leone People’s Party National Young Generation, Patrick K.M Gibrilla, said that the SLPP is very committed to non-violent elections in the country.

He said that the party has over the years supported the activities of civil society organizations and that the party will like always support the Elections Observer Network (EON-SL) as a new elections observer group in the country.

The Executive Secretary of the Electoral Commission of Sierra Leone, Sheku C. Johnny, said that the launching of the Elections Observer Network is very important for supporting the work of the Commission towards conducting  transparent, free and fair elections in the country.

He maintained that the Electoral Commission for Sierra Leone is charged with the responsibility of conducting elections in the country in a free and fair manner, stating that currently the Commission is working tireless in order to ensure that it fulfills its mandate.

The Executive Secretary further used the opportunity to inform the gathering on the activities of the Commission relating to the conduct of the 2023 elections in the country.

Other dignitaries, including the Ministry of Defence Chief of Staff , Major General Christian Fahim Marah, the Resident Minister of North-West who also doubles as Presidential Spokesman, Alpha Khan, a representative from the Office of National Security (ONS) also made incisive statements.