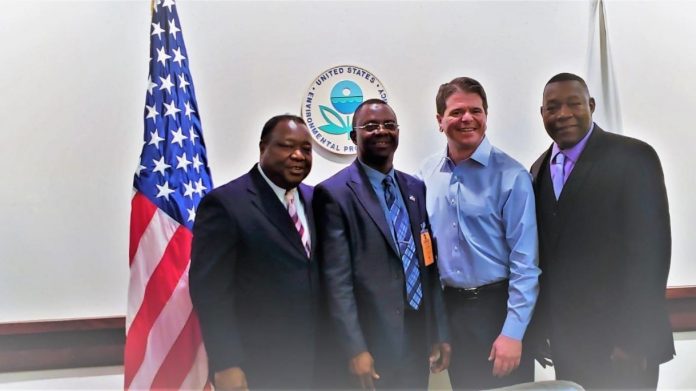 Prof. Foday Moriba Jaward, who is the Executive Chairman of the Environment Protection Agency, Sierra Leone has held discussions with officials of the United States Environmental Protection Agency in a move to establish a strong partnership between the two institutions. The meeting took place in the third regional office of the United States Environment Protection Agency in Philadelphia. The idea behind such a plausible venture was to seek international support in the area of capacity building to address some of the many challenges facing the EPA-SL.
Prof. Jaward used the occasion to make a stunning presentation on the environmental governance framework in Sierra Leone and possible areas of intervention. The Executive Chairman gave an overview of the important strides the government of Sierra Leone is making to improve on environmental protection and management in the country. Furthermore, Prof. Jaward informed his US counterparts that Sierra Leone’s environmental protection was saddled with enormous challenges and that the government of His Excellency the President, Rtd. Brigadier Julius Maada Bio was working hard to ameliorate these challenges. Prof. Jaward went on to state that his institution was in dire need of staff capacity building in the form of training and equipment particularly in the area of air, water, waste management and pesticide control. He further intimated the US EPA that training materials were inadequate for which urgent attention was required. The Chairman added that further training was required on key environmental issues at the local level so that the public would be better positioned to contribute meaningfully to sound environmental management in the country. Professor Jaward further noted that, given the high rate of illiteracy in the country, environmental education and awareness would form a key priority during his tenure as head of the EPA-SL. He stated that His Excellency the President’s unwavering commitment to ensuring quality education for all Sierra Leoneans was an important step towards sustainable environmental management in Sierra Leone.
Responding to Prof. Jaward’s presentation, Mr. John Armstead of the US Environmental Protection Agency Region 3 gave an overview of the structural and legal framework of the US EPA, noting that the US EPA’s mission was to “protect public health and environment”. Mr. Armstead went on to state that the US EPA was created in 1970 and that the institution had ten regional offices across the country that mirrored its headquarters in Washington. Furthermore, Mr. John Armstead stated that the US Congress had given USEPA the authority to implement environmental laws and to provide its funding for the implementation of those laws. He further intimated the Chairman that the US-EPA worked with state governments to implement its
programmes across the United States. Mr. John Armstead added that US EPA had conducted training programmes at international level and that their focus was on programmes like waste management, air and water. Mr. John Armstead also noted that “heightening awareness without having capacity will be failure”, adding that “ there should be equal investment in public education and capacity building in the same area, so that there is a response (on the part of the public) as the awareness increases”.
An official of the US EPA Headquarters, Office of International and Tribal Affairs, Ms. Theresa Kuklinski, promised to avail the EPA-SL a “public participation toolkit” that would be very instrumental in promoting public cooperation and awareness. Ms. Theresa Kuklinski admonished the Executive Chairman to involve Peace Corp volunteers in Sierra Leone in EPA-SL projects since Peace Corps have established strong ties with local communities in the country. Ms. Theresa Kuklinski also intimated the Chairman that US EPA currently has projects in major cities in some African countries including Ethiopia and Ghana.
A partnership with such a leading environmental institution in the US would no doubt be beneficial to the EPA-SL and to the country as a whole which Prof. Jaward is poised to achieve.
Since he took over as Executive Chairman of the EPA-SL, Prof. Jaward has engaged several of our development partners including multilateral environmental agencies with a view to foster cooperation and improve Sierra Leone’s environmental landscape, a move that is germane to development and the promotion of the objectives of the New Direction.