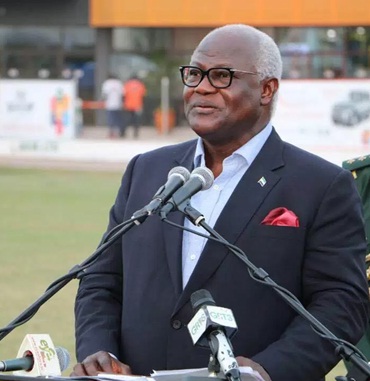 He continued that despite that and although the 1991 Constitution is very clear on the presidential term limit, there seems to have been some anxiety about a political comeback, which is being fuelled by continued calls by several groups for his active involvement in party and national politics.

The Release revealed that in the first week of January 2022, the attention of the Office of the Former President was drawn to a social media campaign with samples of T-shirts and baseball caps calling on the statesman to re-engage in national politics.

It added that his office then released a press statement, dated 6th January 2022, distancing him from such calls and restated his decision that he was preparing and looking forward to relinquish his current position at the party’s upcoming National Delegates’ Conference (NDC).

Also mentioned  is that the general public may recall that a few days ago a group of APC supporters resuscitated the campaign for the outgoing Chairman and Leader to seek reelection in the upcoming NDC.

The Special Assistant stated that in response to that, the former President Ernest Bai Koroma wishes to reiterate that he has no interest whatsoever in party or national office.

It was highlighted that the former President strongly believes that he has been privileged by God and his people, to serve as President of Sierra Leone for two terms; and as the Leader and Chairman of the APC for even a much longer period.

“He says it is now time for him to leave the political stage and continue serving Sierra Leone as a statesman,”  Sheriff Mahmud Ismail pointed out adding how erstwhile President Koroma has noted that he is looking forward to his continued contribution to the promotion of democracy, peace, security and stability in Africa and other parts of the world.

“The former President and outgoing Chairman and Leader of the APC, therefore, thanks the APC and the people of Sierra Leone profoundly for the privilege accorded him to serve them and for the enduring confidence in him to continue to do so,” the Special Assistant reechoed stating that the former President wishes to reassert that it is time for other great Comrades to take the great APC forward.

It was stated that the outgoing Chairman and Leader further notes that the APC, being the great institution it is, is capable of a smooth and successful transition which they have clearly demonstrated over the last four difficult years maintaining that he has therefore appealed to the APC party membership to move on in unity with the great task ahead.

“While the Party is concluding its constitutional reforms, the litigations and preparing for its convention, I urge the general membership to embrace the prospects of a new leadership including the chairmanship of the party, and to work together for victory in June 2023”.

According to Sheriff Mahmud Ismail the former President also reassured that the APC will continue to work with all stakeholders including the Political Parties Registration Commission (PPRC), the Judiciary, and other actors to ensure that the transition process is smooth and that a new Executive is ushered in as soon as possible.

He concluded by stating that in this faithful period of Ramadan and Lent, the Former President and outgoing Chairman and Leader sends his best wishes to all Sierra Leoneans and his prayers for a cohesive, peaceful, democratic, and prosperous country.