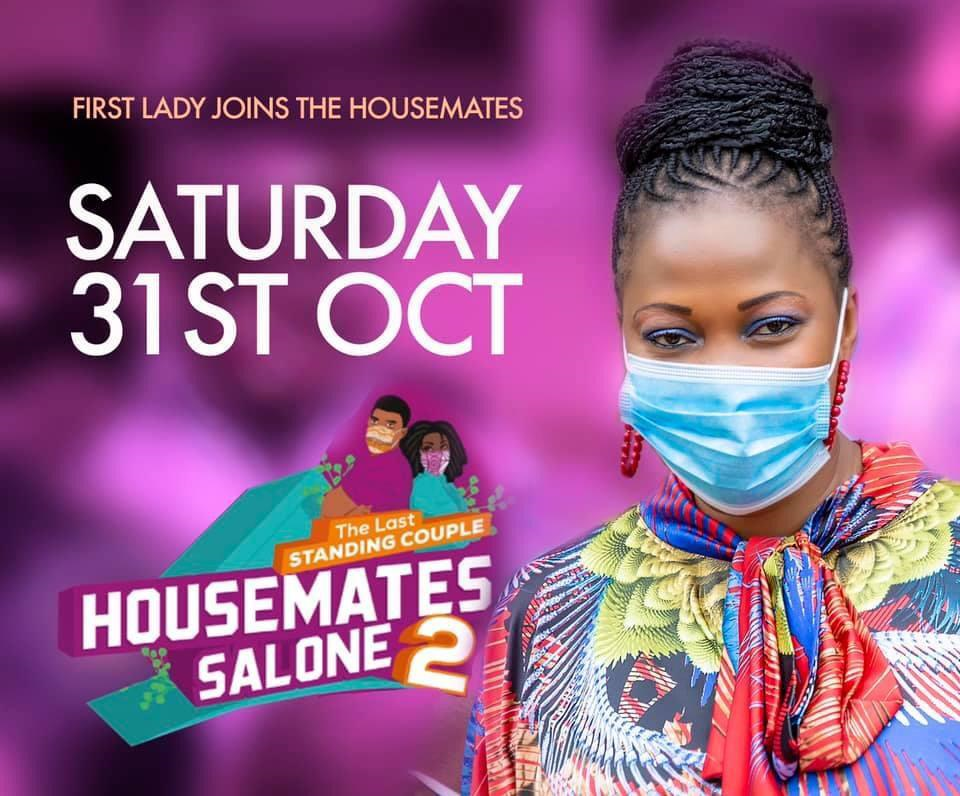 The 31st October 2020 will mark a turning point in the ongoing Reality TV Show, organized by Africell and the Africa Young Voices, as the First Lady of the Republic of Sierra Leone, Her Excellency Fatima Bio, will pay the Housemates a surprise courtesy visit.

According to Fatima Bio, she has been fortunate to have good hearted organizations and individuals supporting her campaign to protect and educate young girls.

She said her visit to the Housemates is geared towards showing sincere appreciation for the support (moral and financial ) that Africell and AYV have given to her campaign, more especially the groundbreaking work AYV is doing in empowering youths through employment and inspiring creativity .

The First Lady expressed the view that the show will be used as a platform to reach out to the young audience stating that it will be a very interactive.

According to her, AYV is the only TV station in Sierra Leone  to formally endorse the Hands Off Our Girls campaign and fully supported the national tour underscoring how the AYV’s new news studio even has the HANDS Off Our Girls logo.

She revealed that Africell has been with her office  and coincidentally both the CEO of Africell and AYV  joined the peaceful protest March against rape in Freetown in 2018 walking from Cotton Tree to Aberdeen alongside other African First Ladies.

“This kind of loyalty from the private sector more importantly from men joining the fight against rape can only be rewarded by Allah,” she stated.

Apart from bagging the Star Prize of Two Hundred and Fifty Million Leones (Le250M), all other participants are entitled to their daily allowances of Le100, 000 each whilst they still remain in the House and accumulatively given to them whenever they are evicted.

All the Housemates are yearning for votes from members of the public. The voting process is simple: To vote for your favourite contestant just send his or her respective number via SMS to 5500 or dial *5500#. For Diaspora Voting supporters of the respective contestants can call +232 99 00 5500.

Interestingly, during particular stages of the Show, based on the percentage of votes scored by a particular Housemate such determines if he or she will be evicted from the House. Evictions will continue until the ultimate winner emerges.

Housemates Salone is all about Youth Empowerment. As the successful Housemates are in the House they are assigned certain tasks to be performed that will shape their characters, they are currently availed the opportunity to learn new skills, improve on existing ones. They are also emotionally tested, afforded the space to find panacea to certain human problems and do a host of other things.

Furthermore, the Housemates are currently benefitting from widespread exposure as the Show is now watched near and far. Talents are been spotted and vistas of opportunities opened as some of the Housemates would be earmarked to become Brand Ambassadors, movie artists, models etc.

As they are now in the House the Housemates are expected to appear sexy and display some form of nudity.

Again, if they are talking harshly then it is because they are to intermittently use strong language and act funnily as the expectation is for them to of be humorous. Manifestation of these traits is what is really making the Reality TV Show very interesting to watch, providing some form of comic relief for viewers and serving as a therapy to reduce stresses.
Organisers of the event, Africa Young Voices (AYV) and Africell are very enthusiast to enhance youth empowerment in the country and Housemates Salone is one platform that is providing that for the young competitors.

What is clear for now is that many people are really enjoying the Reality TV Show, Housemates Salone, as they continue to watch fun packed episodes that ignite lots of laughter and discussions in various circles.

Throughout, viewers are encouraged to continue to stay glued to their TV sets by positioning yourselves in your comfort zones to watch the much talked about “Quarantine Drama”.