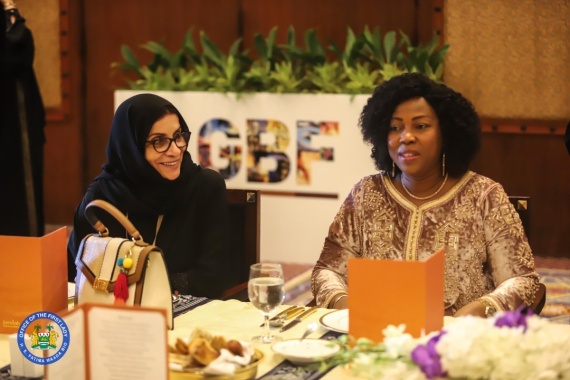 In her usual passionate manner, Her Excellency the First Lady of Sierra Leone, Madam Fatima Maada Bio, has Monday, 18th November, 2019 put forward a strong statement on the position Sierra Leonean women and girls – their struggles and vulnerability during a two-day roundtable luncheon gathering of prominent business women, CEO’s from across Africa and the United Arab Emirates (UAE) in UAE’s capital Dubai. The aim of the luncheon was to exchange experiences about the opportunities and challenges for women in business, while exploring potential synergies.

HE Fatima Maada Bio said that women have long provided the engine that powers Sierra Leone economic even though they face obstacles in trying to fulfill their potentials as entrepreneurs and breadwinners as far back as the 19th century Krio women from Sierra Leone traded in goods all along the West African coast. Later other pioneering women made a name for themselves in business and championing the rights of fellow women.

Fatima Maada said that in 1923 one such pioneer Adelaide Casely-Haywood fought against skepticism and chauvinism to found the Girls Industrial and Technical Training School in Freetown, the first such institution for girls anywhere in West African with the aim of achieving economic self-sufficiency.

Fatima said that women struggling against the odds to make their own ways in life that have been the hidden history of Sierra Leone. That is still the true story of Sierra Leone’s economy today as an estimated 40% of Sierra Leone GDP is produced through the unpaid work of women. According to her, this lack of economic power has a direct impact on ordinary Sierra Leoneans’ ability to work themselves out of poverty.

Fatima Bio said across the world women on average reinvest 90 of their income back into their families -compared to between 30-40% of men.

“For the most part they spend their money on their children – providing them with shelter, putting food on the table and clothes on their backs and critically putting them through school in the hope of giving them better lives and finally end the back breaking cycle of poverty,” she pointed out.

Despite forming the backbone of Sierra Leone’s workforce, women face many obstacles to their success in business and indeed in their wider day-to-day lives.

“Too many in Sierra Leone still have not learned the lesson of Adelaide Casely-Harwood and the generation of other women entrepreneurs before and since. They still seem to believe that education is just for boys.

They see girls and women as second-class citizens who should take back steps. Too often they are married off as teenagers, overlooked for education, excluded from the decision making and denied ownership and access to land and other economic opportunities,” she intimated the audience.

Her Excellency Madam Raja Easa Ai Gurg, congratulated her colleague first ladies for their tremendous jobs in the promotion of women equality in their different nations. She said the gathering is occurring at a time when Governments around the world are recognizing the crucial role women empowerment is playing in driving economic growth adding that inclusive societies are more prosperous societies.

“Countries with more employment opportunities for women increase the possibility for their economic growth,” she said citing Sweden as an example whose GDP is over $600, 000,000 per annum.

“Women play and will continue to play core roles in the development of our societies and through the establishment of gender-balance initiatives much could be achieved,” she maintained.

She furthered that due to this development the UAE is rated among the top twenty five countries for its gender equality-based policies.

“These feats are achievable and women can as well play key roles in a nation’s development beyond government,” she noted.

She clearly stated that women are representatives of high profile companies and as well owners of high profile companies all across the world. She said the UAE has a very diverse population of more than two hundred foreign nationals living and doing business in it. “The United Arab Emirates has always attracted tourists and different sets of investors in the world,” she highlighted.

Her Excellency Raja concluded by saying that she is proud to have been part of a struggle which has within time change the scope and modesty of women around the world. 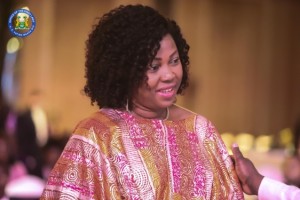