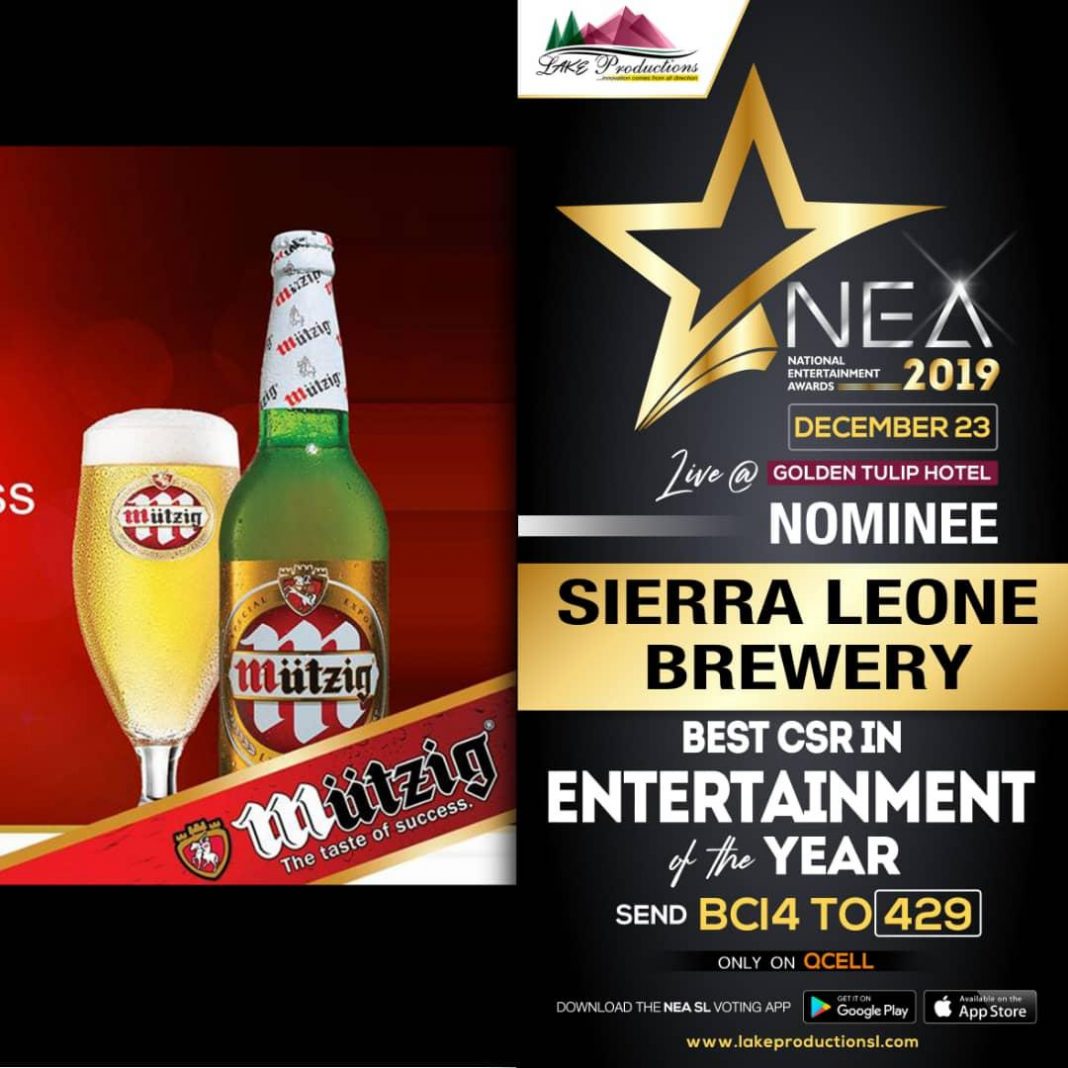 It is not surprising that the SLBL was nominated because during the year, the Brewery has contributed in no mean way to the improvement of the entertainment industry in Sierra Leone. Among several ways in which the SLBL has contributed to the growth of the entertainment industry includes direct sponsorship and indirect assistance. The nomination comes as the Brewery is gearing itself to provide abundant beverages Star, Guinness, Mutziq etc. for the benefit of its customers during the coming festive season.
Meanwhile, the Sierra Leone Brewery Limited (SLBL) has dispelled rumors that there is going to be shortage of its favorite beverages saying such comes from the figment of the imagination of individuals who have no business with the company. As far as Management of the company is concerned there will be enough manufactured drinks on the market to last over time further assuring the public that there is cause for any mad rush to buy and hoard.

To translate its preparedness, the Sierra Leone Brewery Limited (SLBL) on the 8th November 2019 cleared four massive storage bright beer tanks from the Queen Elizabeth 11 Quay meant to be installed at its Wellington Industrial Estate production site in the East end of Freetown. The four massive storage beer tanks are meant to further expand the company’s capacity as well as to help improve the quality of its beer products.

The company has always endeavored to go the extra-mile to ensure that customer satisfaction is prioritized and guaranteed. It could be recalled that in July 2017, the SLBL successfully installed seven new fermentation tanks to enable it satisfy current and future consumer demand.

At that material point in time it was calculated that SLBL’s total investment in Sierra Leone during 2014-2017 rose to more than Le. 180 Billion. With the installation of seven massive Fermentation Storage Tanks (“FSTs”) the production capacity of the Brewery doubled.

A very remarkable thing that has enhanced the company’s profile is that it has been progressively and significantly increasing its production output since September 2016 after the implementation of the Finance Act 2016 which supports the growth of local production and manufacturing.

By increasing the number of its equipment, the SLBL has gained full confidence that it can meet future demands for its high quality products and therefore people should not be thinking of finding it difficult to access their favorite drinks.

“The investment in the tanks and the full investment program is a clear commitment of Sierra Leone Brewery Limited in Sierra Leone. This will also create more jobs in Sierra Leone and with our business partners, including the sorghum farmers,” Managing Director of the company, Daaf van Tilburg, said.

The company is well known for weathering many storms but out of sheer determination to succeed, it has survived and is still going strong. This singular accomplishment within the business landscape could only be interpreted within the confines of good managerial skills amidst stiff competition from importers of foreign beverages.

The operations of the Brewery have made it possible for an exponential increase in the number of sorghum farmers in the country. It is important to note that any expansion in its production line means that there must be a corresponding increase in the quantity of sorghum, an ingredient used in the production of beverages.

In this direction, the SLBL has created awareness on the need and significance of cultivating sorghum and indeed the number of sorghum farmers is increasing and statistics place the figure at over 25,000 farm families.

In a country with arable land suitable for various agricultural purposes the presence and operations of SLBL gives opportunity where farmers could realize their full potential and derive financial reward from their efforts.

Expansion in its production chain definitely will result to the creation of more jobs especially for those skilled persons. Since its inception, the SLBL has been a source for various employment opportunities and such has been growing over time.

As an ambitious business entity that is always thinking of positively forging ahead, the Brewery creates employment along the way. It is highly likely that with the installation of the four massive beer storage tanks, additional tasks will have to be accomplished which will warrant more people to be employed.

Factually, in offering employment opportunities the company is playing an instrumental role in reducing poverty.

When cognizance is taken of the rolling-out of its Corporate Social Responsibility, the Sierra Leone Brewery Limited is an exemplary entity especially doing so for residents living within its area of operations, the Wellington Industrial Estate. It is on record how the company has contributed greatly in enhancing water and sanitation within the Wellington Industrial Estate and in other places.

The company has so far facilitated the construction and commissioning of standard water facilities which have changed the narratives in communities where people hitherto found it extremely difficult to access those facilities. Indeed standards of living in those impoverished communities are changing for the better.

The Sierra Leone Brewery Limited is a major contributor to the Government’s revenue coffers as it timely honors its tax obligations. Besides, at any given time that it is clearing imported equipment at the sea port to beef up its production line, various Customs duties are paid. Prior to the clearing of the aforementioned four massive storage beer tanks, the SLBL paid all the requisite Customs duties to the National Revenue Authority.

Through such means, the country’s premier brewer of variety of beverages is contributing in capacitating government to undertake the implementation of different development projects countrywide.

What is really certain for now is that old and new customers are well assured that with the installation of four massive bright beer tanks they will always have enough and to spare for all entertainment purposes and other social gatherings as the festive season draws near. Bartenders are guaranteed of this and there is no need to panic and hoard the favorite drinks that so many are finding refreshing and good for purpose.