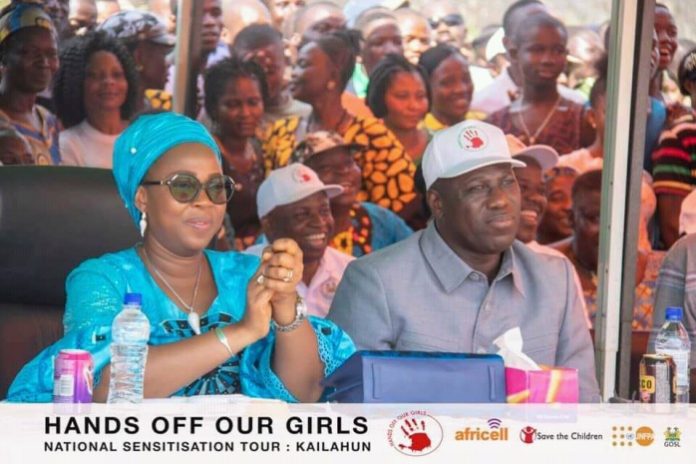 Taking the ‘Hands Off Our Girls’ Campaign to Makeni, Kono, Moyamba and Pujehun Districts, the First Lady, Madam Fatima Bio, on Saturday 23 November 2019, decided to take the campaign this time round to the Eastern District of Kailahun.

The campaign is aimed at putting a halt or mitigating the numerous untoward sexual approaches girls face within communities in Sierra Leone; a cause which has seen the increase in rape, sexual penetration cases as well as leading to unwanted pregnancies.

Welcoming the First Lady and entourage in Luawa Chiefdom, Kailahun district, the Deputy Chairperson of the Kailahun District Council, Madam Nancy Coomber, expressed her heartfelt gratitude to Madam Fatima Bio on behalf of her people, especially the women of Kailahun district who have long yearned to be part of the First Lady’s watch, through the campaign.

She said the essence of the ‘Hands Off Our Girls’ Campaign cannot be overemphasized and as a Council, they will endeavour, within their powers, to complement the efforts of Madam Fatima Bio and her husband, H.E Julius Maada Bio to better the lives of Sierra Leoneans.

She admonished the women present to join the fight against sexual abuse of children, admonishing them to be vigilant and to report at all times such cases affect them, a family member or a neighbour.

“Parents must at all times ensure that their girl child are protected, especially those at very tender ages. Girls should not be used as shields for money making purposes,” she furthered.

She appealed to the First Lady to provide logistics to the vibrant women groups within the district, who are eager to make the campaign a success in the district.

The President of Kailahun Women in Governance, Madam Lucy Foray Gondor, said the Movement was formed to champion women activities within the district, also disclosing how the group clearly frowns at any society where women are devalued, as their mandate is to create a society in which women are included for the general good.

Madam Gondor assured the First Lady of her organisation’s support towards the fight against the indiscriminate sexual offences against girls.

Honourable Wuyatta Songa of Constituency 008 in Kailahun district, in delivering a statement on behalf of her constituents and other Parliamentarians within the district, assured the First Lady of the people’s desire to see the ‘Hands Off Our Girls’ Campaign become very successful in the district.

She said in complimenting her strides, Parliament sometime this year amended the 2012 Sexual Offences Act, making it very relevant in the fight against sexual violence.

Madam Songa congratulated the First Lady for her relentless fight to see the law passed in Parliament, implemented judiciously for the good of Sierra Leonean girls.

The Resident Minister-East, Andrew Fatorma, in his brief statement, commended the First Lady for her firm stance to support her husband’s determination to  make Sierra Leone a better State.

He maintained that as a man, he is disheartened to hear news of men sexually abusing young girls. He admonished the girls who are aspiring to be role models in the future, to reject whatever untoward approach men make, though he said, it takes courage and self-belief.

The Minister of State-East called on men to distance themselves from girls who are supposed to be within the same age brackets with their daughters.

“We assure the First Lady, Madam Fatima Bio, of our determination in the fight against sexual penetration and other related sexual activities against girls,” he affirmed.

Paramount Chief of Luawa Chiefdom, PC Mohamed Sama Kailondo, praised the First Lady for her courage and enthusiasm to protect girls in Sierra Leone. He also assured Madam Fatima Bio and her entourage of his chiefdom’s commitment to eradicate sexual menaces against the girl child.

Launching the ‘Hands Off Our Girls’ Campaign in Kailahun district, the Girl Right Defender, as she is called, Her Excellency Fatima Bio, greeted chiefs and stakeholders of the district, whom she described as her mothers and fathers, whose help she went to Kailahun to seek for the sake of Sierra Leonean girls.

She advised the girls to desist from the evil wiles of men, which, she hammered home, have been detrimental to their course of actualising their dreams.