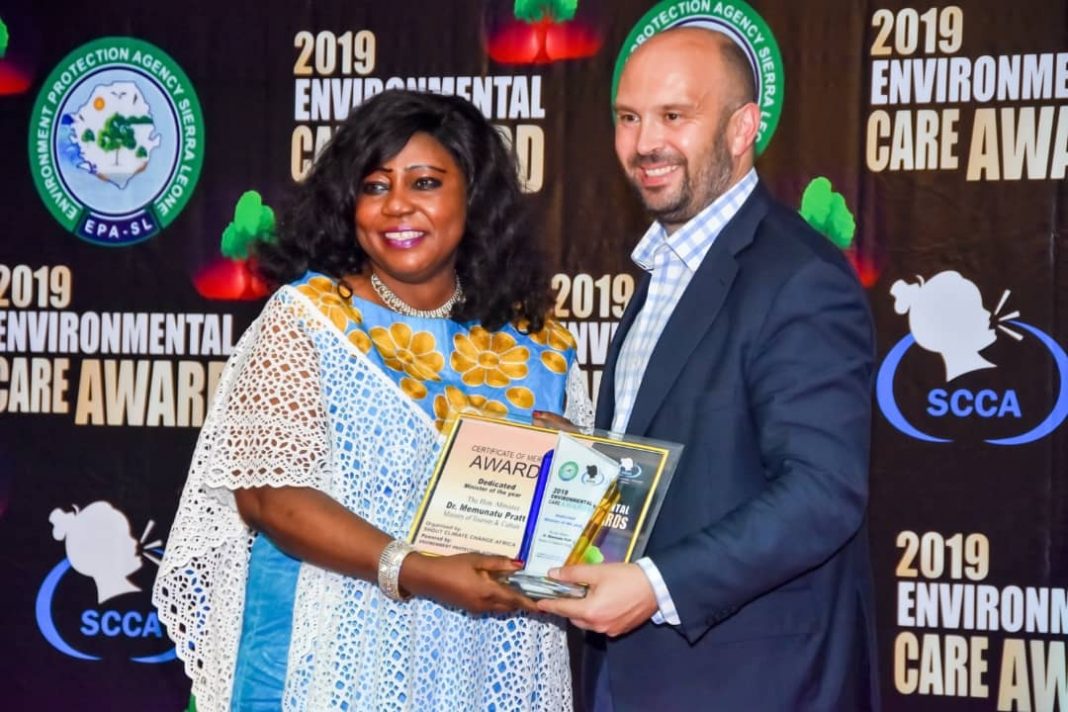 Shout Climate Change Africa, a non- governmental organization that has high stock of professional mix of expert in various field ranging from climate change to other environmental and development issues, has awarded the Minister of Tourism and Cultural Affairs, Dr. Memunatu Pratt, the “Minister of the year” award, which was handed over to her by His Excellency Simon Mustard, British High Commissioner to Sierra Leone during the National 2019 Environmental Care Award 2019, held on the 23th November 2019 at the Miatta Conference Hall in Freetown.

According to ‘Shout Climate Change’, the aim of dishing out the award to her is anchored in the belief in the tremendous efforts made by her ministry under her watch towards the environment and the tremendous roles she has played in society, which are very essential to moving the country forward.

Shout Climate Change Professional Awards are also aimed at raising the profile of dedicated professionals who have contributed towards the environment, and highlights the contributions they are making towards developing a fairer, sustainable, peaceful and prosperous future for all Sierra Leoneans.

Commenting after receiving the Award, Dr. Memunatu Pratt expressed appreciation to Shout Climate Change Africa for recognizing her effort towards nation building, adding that “the award is heartily dedicated to the cause of her promotion of the ideals of the tourism sector and the environment in our beloved nation.

She said that amidst the challenges inherited, the government rates Tourism as one of its top priorities, adding that the President is passionate about tourism and wants to see the industry revamped and serve as a boost to the economy of the country.

She noted that they have found out that the Tourism sector should have been one of the areas that could have responded to things like youth unemployment, skills development, private sector development, trade and investment and developing the basic culture of patriotism and national cohesion, adding that they have been working towards this end.

She assured her audience that she will remain humble and committed in rebranding the tourism sector and will work with Shout Climate Change Africa in protecting the environment, as part of their responsibility is to educate the people about the value of preserving the environment and which they remain committed to do in order to avert disasters.