In the bid to examine their work, challenges, future plans and achievements towards the development of students of Fourah Bay College, the Student Union Government Executive has on Sunday 19th July,2020 concluded  three day retreat at York Village in the Western Rural District.

The three days retreat attracted former Student Union Presidents, members of the Cabinet and a cross section of students of Fourah Bay College in order to discuss issues relating to the welfare of students, the college and the Student Union Government.

He assured the Student Union Body of his unwavering support towards the development of the college.

FBC SU President , Augustine Bona, said that since a decade of break in Student Union politics students have not been able to get access to better welfare and services stating that therefore his Government has recommitted itself to ensure that students receive the best of services at all times.

He said the resolutions adopted are central to bring the best for FBC stating how they are groundbreaking but very realistic and achievable too, adding that they are a recollection of the Rebuilding dream, with a renewed spirit of acceleration and achievability, as put forward by their Government.

He further disclosed that he is currently organizing an online Writing Competition as a great step to be taken by his Government to keep students mentally active during this period of the COVID-19 pandemic maintaining how he believes that he has a moral duty to serve the interests of students at all times further noting that the competition is also geared towards achieving their dream of rebuilding Fourah Bay College.

Giving the vote of thanks, Vice President of the Union, Claudia J.D Redwood-Sawyer extended appreciation to the entire cabinet members of the Union for their tireless efforts in trying to achieve their goals as a Government.

She urged them to continue the good work in working for the interest of the students of Fourah Bay College, adding that with determination and collectiveness they can achieve their mandate as a Union. 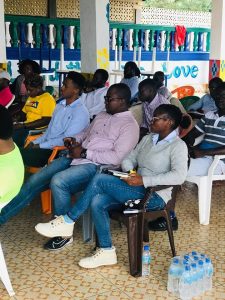