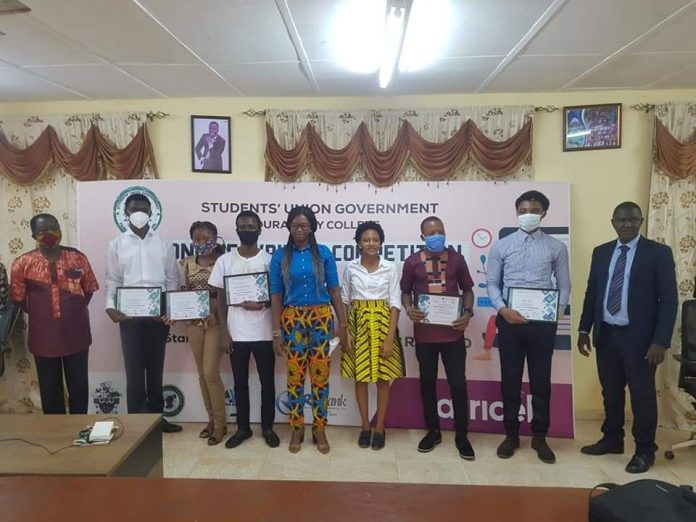 In order to reward students for their writing prowess in the country, the Fourah Bay College Student Union Government has on Friday 10th July, 2020 awarded cash prizes and certificates to winners of their organized Online Writing Competition during an auspicious ceremony held on the college campus in Freetown.

The Union gave a total of Le1.7 million to the first, second and third runners-up and also presented Certificates of Merit to the fourth and fifth runners-up.

Dean of the Faculty of Acts, Fourah Bay College, John Abdul Kargbo, expressed appreciation to the FBC Student Union Government for organizing the online writing competition which he said has contributed towards the development of students, adding that research helps students to know what is happening within their vicinities and help them improve their grammar.

He appealed to the FBC Student Union Government that in subsequent competitions they should not only focus on an online platform but also make room for normal writing as many want to participate but they don’t have the facilities. He described women as very good writers and in that regard he encouraged them to compete with their male counterparts in future competitions.

Minister of Education of the FBC Student Union Government, Madam Pleasant Kargbo, also expressed gratitude to the winners of the online writing competition. She disclosed that the competition was organized in order to rebuild and strengthen students’ research abilities in the country.

She said that with a number of entries received, a thorough screening was done by a quorum of erudite and reputable judges and they were able to present winners for the competition, adding that as a Student Union Government they will continue to rebuild as the welfare of students remains their utmost priority. She noted that it was a rigorous process for the judges but commended them for being up to the task underscoring how she believes that the integrity of the judges demonstrated the credibility of the competition.

Vice President FBC Student Union Government, Claudia Redwood Sawyer, said that due to the outbreak of the COVID-19 in the country, learning institutions were shut down in order to curtail the spread of the virus in the country.

She further disclosed that the Online Writing Competition is a great step taken by the Student Union Body to keep students mentally active during this period of the COVID-19 pandemic maintaining how she believes that they have a moral duty to serve the interests of students at all times further noting that the competition is also geared towards achieving their dream of rebuilding Fourah Bay College.

She extended appreciation to their partners for the tireless efforts they have been committing towards the successes of their children.

Suliaman M. Bonnie, of the Language Studies Department, who took the first position, expressed appreciation to the FBC Student Union Body for organizing the writing competition which he said was a move in the right direction towards rebuilding and strengthening students of Fourah Bay College.

He disclosed that this online writing competition has given him a moral boost in order for him to continue his writing ability that is built on his research ability, adding that he has been participating in other competitions but said he felt happy to emerge as the best essay writer.

He urged colleague students to take the writing competition serious and also see it as a window of  opportunity to explore the potentials that are in them as students. 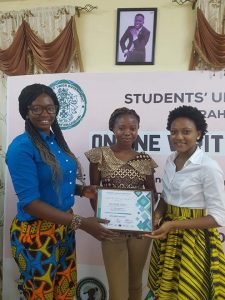 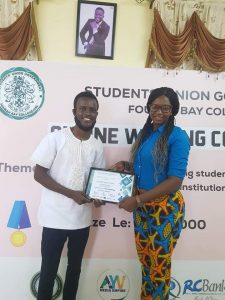