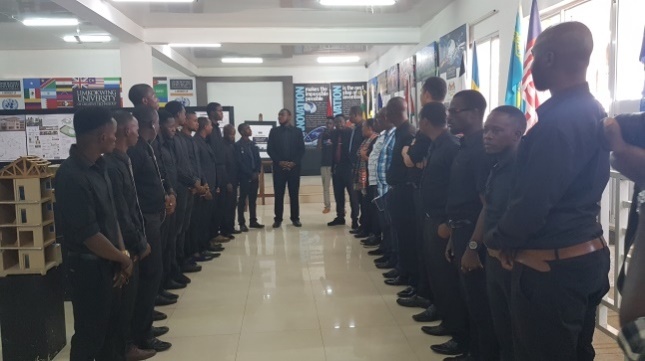 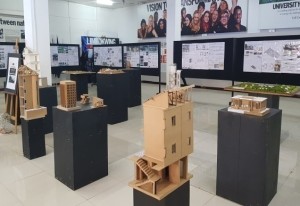 The first set of Architecture and the Built Environment Students of Limkokwing University of creative technology in Sierra Leone have been unveiled.
The unveiling which took place at the university Gallery took the form of design exhibition which started on the 28th March and ended on Friday the 29th March 2019.
Head of Faculty, Okanlawon Abraham Shina explained that
the reason why they did the exhibition is for Sierra Leoneans to see what their students have been doing for the past two years.
He said the journey was not an easy one, as the course itself is not meant for lazy people.
He pointed out that Limkokwing University is the first University in Sierra Leone to offer Architecture course.
“Sierra Leone is one of the most beautiful countries in the world, a country that is invested in nature and fantastic sea views and now you can imagine if all these nature is exploited what it will look like. Because of lack of Architecture, the country looks back on the old days.”
He spoke about the war among other issues that have pushed the country backward, hampering the course of urban development, but now they are talking about urban renewal.
“…the country is now redeveloping and we don’t have planners to plan how it will look like.”
He spoke further of how the University conducted feasibility studies, which is why it brought in such a course to help shape the country’s view and to develop its economy by attracting investors, which will prolong their stay and make them feel at home.
The students have been trained academically and professionally.
Abraham Shina said because Sierra Leone doesn’t have enough Architects, people are building in unplanned way thereby distorting the country’s looks.
“That is why we have this new student. By the time they go out, they will change the face of Sierra Leone generally. People are constructing houses without saving cost. They have been trained to save cost.
All the designs are done by Sierra Leonean students and I am proud of them all.”
Limkokwing University Program Leader, Ismail Rabluismail, explained that the university has three different programs; starting from diploma to degree and what the students demonstrated was done by the final year students.
Sulaiman Conteh encouraged the students as they are going out to carry out their duty and become the agent of change of local Architecture.
“Who ever thought you can do what you have done? You have to change that mind set. It will not be easy. Sierra Leoneans have negative thinking, you have to make that change possible, because the problem of Sierra Leone is not physical, it is psychological.”
He added that Sierra Leoneans are very intelligent people, they will believe and do what you tell them.
One of the final year students, Richard Akwnma-Eboja, described the course as a hard one.
Richard Akwnma-Eboja said he is not feeling good about the current Architectural design of Sierra Leone, adding that from what he has learnt; he will be a change maker.
“I am encouraging others to come out; they can do it not because of money but to put Sierra Leone on the map.”