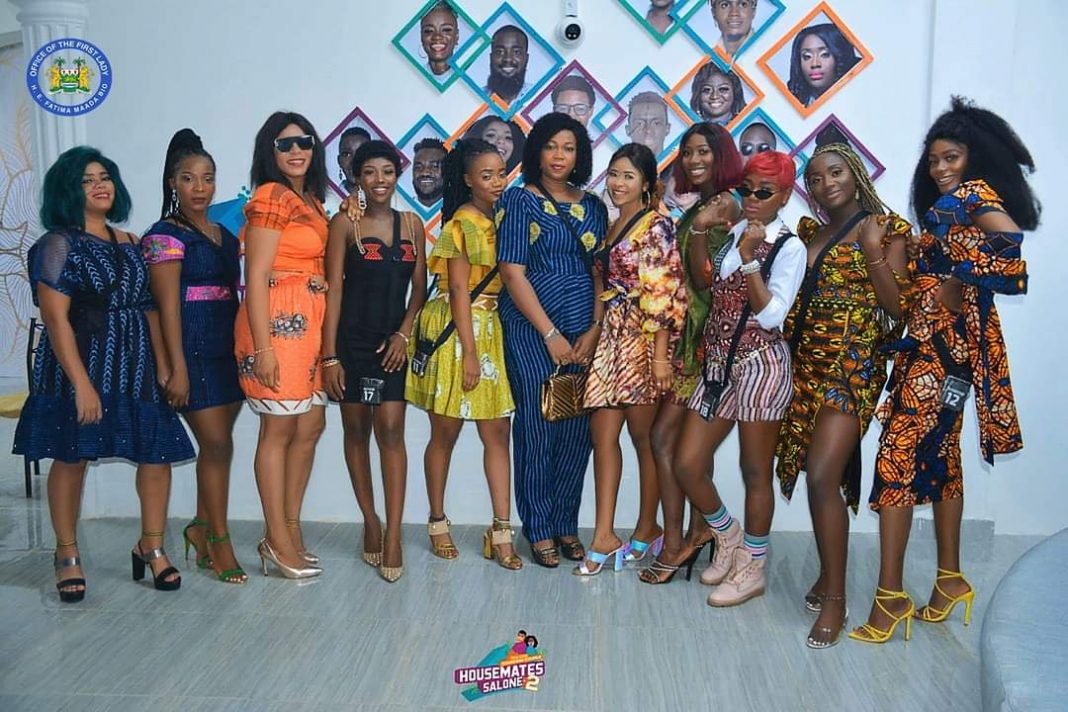 Housemates Salone Season 2 is getting hotter as interesting episodes keep unfolding. The gossips, the intimate relationships courting, the educative debates on various topics and the hullabaloo going on in the House are adding juice, maggi and pepper to the unique Reality TV Show that is being staged in Sierra Leone, brought together by courtesy of Africell and AYV.

The latest episode that caught the Housemates and even viewers by surprise was the visit of the First Lady, Madam Fatima Jabbie Bio’s courtesy visit to the Housemates this past Saturday, 31st October 2020. Her visit has been seen by many as Her Excellency’s continued efforts to touch and change lives of citizens, irrespective of their political affiliations, religious beliefs, tribes/ethnicities, regions, or economic status. Her presence in the house has been described as a game changer and one which broke barriers and bridged gaps.

This episode could be best described as very significant, not only in giving confidence to the Housemates to continue doing their best, but to know that after Housemates Salone Season 2, their invaluable contributions to nation building will be of utmost importance.

Her inspirational messages, encouraging them to continue keeping their heads high, to have self-esteem and be change makers, were well in place, encouraging and would definitely help to define the rationale behind the Reality TV Show, which borders on Youth Empowerment.

Housemates Salone Season 2 provided the right platform for the First Lady to reiterate her campaign “Keep Your Hands Off Our Girls” and other burning issues relating to Sexual and Gender Based Violence, and the need to come together to combat the social malaise of rape and sexual penetration to the wider audience, especially viewers of this special episode in the ongoing show.

Though the First Lady has taken the campaign to almost all the districts of the country, her visit to the House took the campaign to another level and the intended impact could be huge, as the bulk of those who are emotionally attached to watching the Reality TV Show are young people, and therefore the expected outcome will be positive in terms of people knowing more about the ramifications of perpetuating Sexual and Gender Based Violence.

Housemates Salone Season 2 has captured the hearts and minds of many, evident in the various discussions it is generating. For now, many viewers know the Housemates by their individual names and can vividly describe their behavioural patterns and the attributes they possess.

This Reality TV Show is currently giving viewers a lot of fun and laughter.

The Housemates that are now in the House were drawn from various parts of the country and from different backgrounds and are currently competing to the best of their abilities to scoop the votes from members of the public, until such a time when the show will reach its climax, with evictions along the line, ultimately leading to the clash of the Titans to determine the final winner.

However, Housemates Salone 2 is designed in such a way that for every day any of the Housemates stays in the House, he or she becomes automatically eligible to earn one hundred thousand Leones (Le100, 000).

It is important to note that in order to keep the Housemates in the House, viewers must vote for them. In other words, their survival in the House largely depends on the voting public.

According to the organizers, this exciting Reality TV Show was put together against the backdrop of promoting Youth Empowerment. Better put into perspective, Housemates Salone 2 encompasses providing mentorship for young aspiring Sierra Leoneans, who believe that they have talents that they could showcase that will not only be sources of entertainment for viewers, but provide valuable insights as to the everyday behavioural patterns of young people living together.

However, the most important aspect of the Reality TV Show is that it is serving as a conduit via which the Housemates are taken through  mental and physical exercises that will end up to mould and shape their characters. They are now benefitting from being guided to be motivational speakers, to think critically as well as rationally, how to healthily interact, how to solve problems, to cook, to sing, dance, control emotions and stress.

The Housemates now have the opportunity to learn from what visiting guests, including the First Lady, Madam Fatima Bio, as well as officials of corporate institutions will teach them, learn how to play games and a host of other things that are aligned to coping mechanisms in life.

Another good thing about the show is that it has now put all the Housemates in the spotlight, as the Reality TV Show is being watched by many in and out of the country. People are now coming to know them, and the talents they possess and what they are capable of doing. The show is a window of opportunity for the Housemates, as some people out there could be interested in tapping the talents that they have seen displayed, which could end up in changing their fortunes in life. Indeed something has to start somewhere!

Housemates Salone Season 2 will definitely leave an indelible imprint on the entertainment landscape of this country and positively change lives.