On June 16, 1976, in Soweto, South Africa, about ten thousand black school children marched for about half a mile long, protesting the poor quality of their education and demanding their rights to be taught in their own language. They were shot, murdered and Peter Hector being one of the famous among them.

The Day of the African Child has been celebrated every year since 1991, on June 16th, when it was created by the Organisation of African Unity (OAU).

First Lady of the Republic of Sierra Leone, Mrs. Fatima Maada Bio, on Tuesday June 16th, 2020 at 12PM ,celebrated the Day of the African Child in a Zoom meeting .

The lines were lighting up fast as participants joined the Zoom virtual meeting hosted by the First Lady of the Republic of Sierra Leone, Fatima Maada Bio. According to the First Lady, she was not able to host a face-to-face program because of the COVID-19 pandemic, but instead sent a variety of food items to the Orphanages/Children Centers across Freetown, and virtually communicated with them on Zoom as the distributions were made.

As she listened attentively to the messages from the children/young people, the participants (both young and old) resonated with the ordeals of some of the children as they later spoke about their experiences and how they were able to heal. Questions/concerns/recommendations that had to do with the Ministry of Foreign Affairs, the Ministry of Social Welfare and even messages for the President of the Republic of the Sierra Leone, Rtd, Brigadier Julius Maada Bio, were appropriately referred, with the First Lady assuring all, especially the children that their concerns and questions are paramount to President Bio, one of the reasons, she was hosting the virtual Zoom meeting.

Some have said that Fatima  Bio has continued to play supportive and advocacy roles demonstrating her commitment to the welfare of the children in Sierra Leone, by launching the “Hands off our girls” campaign, the Sanitary pads initiative, distributing food items, the Bio Foundation, advocating and giving voice to the voiceless at the UN and International levels.

In a related development, President Bio, who was speaking in Krio, started by thanking his wife for making it possible for such a successful meeting, all stakeholders and the children for participating, celebrating children in Africa.

Unfortunately, His Excellency went on, because of the COVID- 19 pandemic, they cannot gather in one place, otherwise a boy or girl would have been in his office to get hands-on experience in the Office of the President of Sierra Leone.

He pointed out that a lot of children want to be President, but don’t know what it entails. President Bio opined that it is difficult for the young people to understand that they are the future. However, he believes that the children are our future and so has invested in their future; because ten or twenty years from now, he will be dependent on the young people, if they are not prepared, they will not be able to do the job very well. Because President Bio cares about his future, he decided to focus on quality education, for the young people, which will not only benefit him, but themselves, their parents and the country as a whole.

His Excellency said that when he decided to make Free Quality Education a priority, it was because it is the only way one can invest in human beings by giving them good education, as the future is in education. If all parents plan to keep their children in school, His Excellency emphasized the need for his Government to go all out to get funding to invest in children as the young people need the support, attention, grooming and nurturing. This now took him to the reason for a special place for the girl child that is prone to be pregnant, harassed, distracted; in as much as the goal is to take care of everyone, the young men as well, but special attention is on the girl child.

President Bio thanked the First Lady, Fatima Maada Bio for organizing the program. He mentioned that he wants the children to have better education than him (Maada Bio), make Sierra Leone better than where he will stop as President, not dependent always on their parents and others but lift their parents out of poverty saying all will live happily.

For these reasons his Government invested in the Free Quality Education for all, regardless of where one comes from, whether east, west, south or north and it will be distributed equally. He encouraged the young people to focus on education, that way the country will benefit from highly trained Doctors, Lawyers etc.  President Bio reiterated that he was glad to see them and be part of the virtual Zoom program. He ended by saying” Never give up, never give up, keep working hard, keep praying you will get there”.

The virtual Zoom program continued with its Host, Fatima Maada Bio, interacting with participants and bringing another Special Guest, in the person of Ms. Amina Bio, daughter of the First family. From the screens of the participants one can see how excited they were to see her as she sat next to her mother, the First Lady of Sierra Leone. Mrs. Bio who was hosting a Zoom meeting for the first time impressed her viewers and also demonstrated to young girls that technology is an everyday use and one must learn to use it and not be afraid of it.

Today in Sierra Leone, children do not have to go through police brutality to gain access to quality education. On Monday August 20th, 2018, the President of the Republic of Sierra Leone, H. E. Julius Maada Bio launched the Free Quality Education in Sierra Leone and on December 14th, 2018, the “Hands off our girls” campaign was launched, by H E Julius Maada Bio, “Before he officially launched the initiative, His Excellency President Julius Maada Bio said he was happy to join hands with the Office of the First Lady and other African First Ladies in what was a rightful fight of social injustices against women and girls”.

The Day of the African Child 2020 theme reflected on ‘Access to a Child-Friendly Justice System in Africa’ as adopted by the African Union Executive Council, during its 34th Ordinary Session, held on 07 – 08 February 2019. 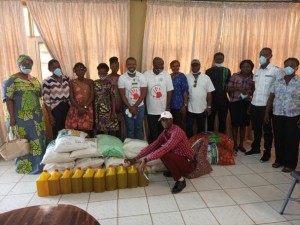