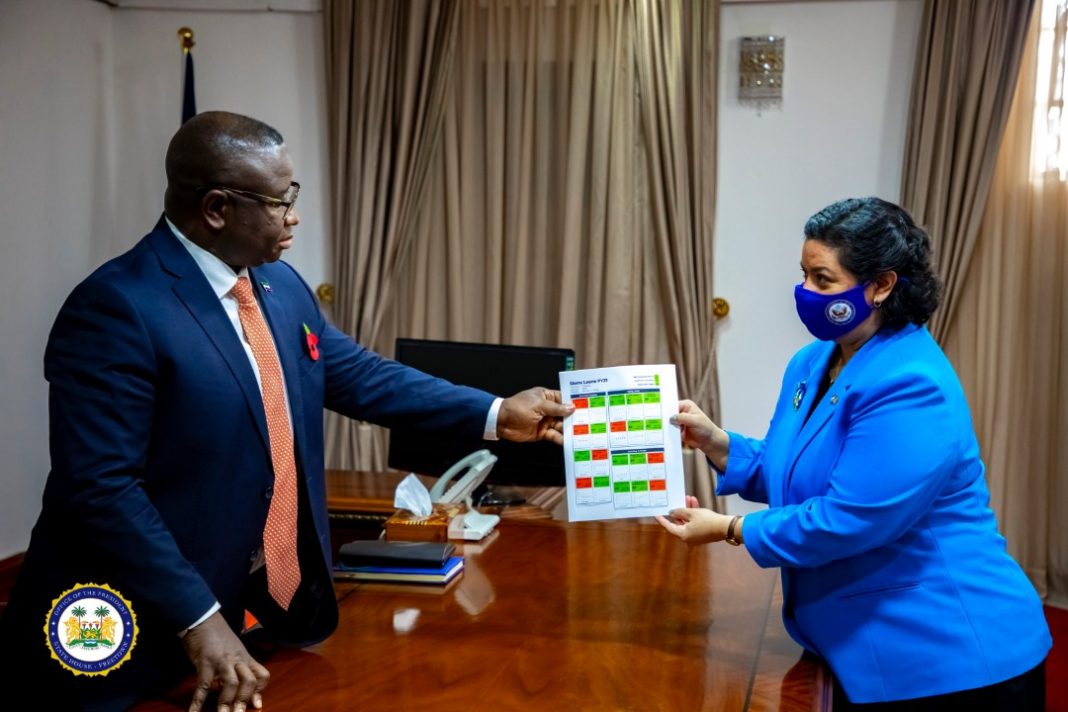 At State House on the  9th November 2020,  Maria Brewer, the  United States Ambassador to Sierra Leone,  congratulated His Excellency, President Dr Julius Maada Bio, for Sierra Leone’s performance in passing 13 out of the 20 Millennium Challenge Corporation, MCC, scorecard indicators for 2020.

“Thank you, Mr President, for seeing us this morning and I have the honour and privilege to formally hand over to you the scorecard and to congratulate the Government and people of Sierra Leone for passing not just the scorecard but actually passing 13 of the indicators. By passing two additional indicators from last year as well as increasing your control of corruption score to 81% from 79% last year, you do us proud. So, congratulations Mr. President,” she said.

Thirteen passed indicators is the highest Sierra Leone has ever scored on the MCC scorecard since it was created 16 years ago, passing the scorecard for two years in a row for the first time.

Before presenting the team to the President, Vice President Dr Mohamed Juldeh Jalloh, who is supervising the activities of the Millennium Challenge Coordinating Unit in the country, said they had worked very hard in the last twelve months to get there.

Receiving the scorecard, President Bio thanked the American Ambassador and the MCC for what he called a more objective evaluation of what his Government is doing, adding that the MCC Scorecard was an aggregation of different independent groups who were watching the Government’s governing systems.

“As a country, we are happy for this progress, especially as it relates to energy and water, which are very important components. The threshold programme of the MCC has been of great help and we hope that the foundation laid by this programme will actually help us in those two sectors,” President Bio noted.

The MCC, created in 2004, is an independent US Government agency that works to reduce global poverty through economic growth. It provides time-limited grants and assistance to poor countries like Sierra Leone that meet rigorous standards for good governance, from fighting corruption to respecting democratic rights.

On the same issue, the Anti-Corruption Commission (ACC) has informed the general public that Sierra Leone has again, and in three consecutive years, increased Sierra Leone’s score in the ‘Control of Corruption’ Indicator in the Millennium Challenge Corporation (MCC) Scorecard, moving from 79 percent in the 2019 Scorecard, to 81 percent in 2020, thereby adding 2 percentage points upwards.

The Commission stated that between 2017 and 2020, Sierra Leone has made a total of 32 percent upwards stating that in this year’s Scorecard, Sierra Leone made more gains in the ‘Control of Corruption’ indicator than many other countries including Nigeria, which scored Zero, Ghana 75 percent; Mali 71 percent; Ivory Coast 46 percent; Liberia 56 Percent; Cameroon 38 percent; and Mozambique 63 percent; Egypt 29%; Malawi 65; Zambia 75 percent, It furthered that by this year’s report, Sierra Leone is among the top ten performers in the country’s income category; one of the best performers in Africa; and number one in the Mano River Union.

According to the ACC, in the 2020 MCC Report, Sierra Leone passed 13 of the 20 indicators, including the mandatory “Control of Corruption” indicator. Therefore, Sierra Leone is now “Compact Eligible.”

This means Sierra Leone is eligible to benefit from the US Government Compact Fund between US$400 and US$600M.

The Commission also pointed out that similarly, Sierra Leone also scored high in other global, regional, and domestic anti-corruption rankings within the past three years. In the Global Corruption Barometer of 2019, Sierra Leone ranked 3rd out of 35 African Countries surveyed on “Government’s Effectiveness in the Fight against Corruption.” In the Afro-Barometer of 2018, 54% of Sierra Leoneans agreed that the Government is performing “very well” in the fight against corruption.

According to the 2020 Afro Barometer Report, corruption prevalence in Sierra Leone declined from 70 percent in 2015 to 40 percent in 2020. Additionally, a National Perception Survey, conducted by the Center for Accountability and Rule of Law this year, revealed that 92 percent of the respondents were convinced the fight against corruption in Sierra Leone is on the right course. Similarly, Sierra Leone also moved 10 places upwards in the Transparency International’s Corruption Perception Index 2019 and scored its highest score to be positioned at 119.