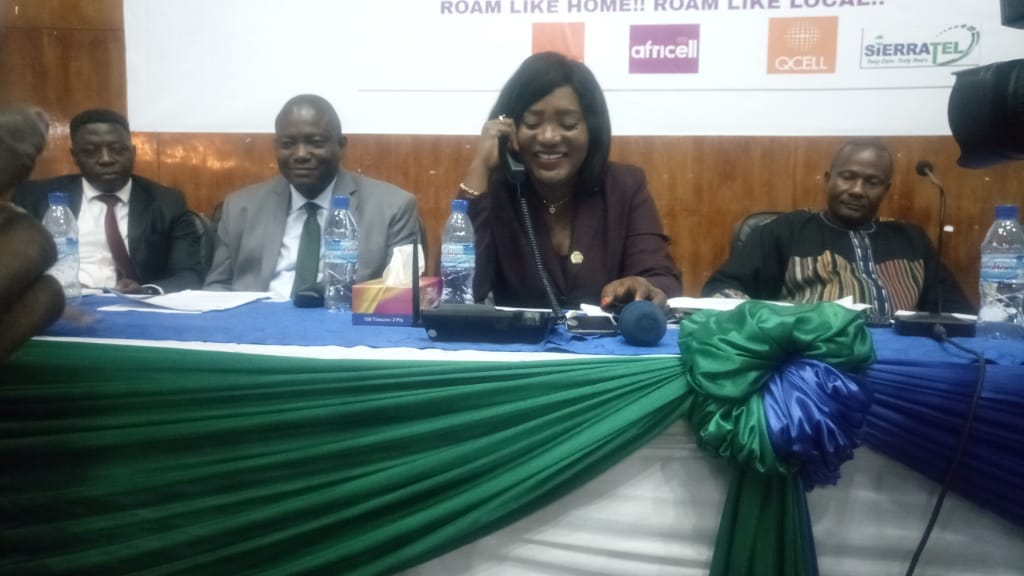 In a bid to enhance quality and affordable communication within the African  region, the National Telecommunication Commission (NATCOM) in collaboration with the Ministry of Information & Communications has on Monday 16th December, 2019 launched a free regional roaming call service at the Miatta Conference Center, Brookfields in Freetown.

Speaking during the launch, Director General of the National Telecommunications Commission (NATCOM), Maxwell Massaquoi, said that in 2016 in Dakar Senegal the West Africa Telecommunications Regulators Assembly (WATRA) mapped out a road map for the establishment of free international roaming service in West Africa, adding that his predecessors signed up to the agreement {Abidjan protocol} for the implementation of the free roaming system.

He furthered that thereafter they decided to put the signatures behind the iron curtain noting that there are numerous advantages that come along with a regional free roaming initiative. The DG revealed that on the 26th April 2019 he signed on behalf of the Government of Sierra Leone a Memorandum of Understanding (MOU) with other Mano River Union member countries for the actualization of the regional free roaming maintaining how the one area network initiative is based on the principles of collective responsibility and best practices.

He also disclosed that since that time they have focused on  collaborative partnership and strategic   engagements with relevant stakeholders that made it possible for the launch. He continued by saying the free  regional roaming  will continue to promote regional integration, bring down high costs of mobile roaming , eliminate charges for receiving voice calls  in Senegal , Mali, Burkina Faso, Ivory, Togo, Benin, Guinea and Sierra Leone.

“The realization of the free roaming initiative is in line with the Commission’s objective of promoting Government’s digital revolution programs, expanding and making accessible and affordable telecommunication services in Sierra Leone,” he pointed out and extended bravo to the New NATCOM Team saying they can now keep and use freely their mobile number while travelling to and within the aforementioned countries without extra charges further gingering, “roam like home, Roam like Local”.

He thanked the mobile operators in Sierra Leone for their unflinching collaborative efforts and support to actualize the roaming service.

The Deputy Minister of Information and Communications, Mamadi Gobeh Kamara, in her keynote statement said the launching of regional free roaming is a manifestation of Government’s commitment to ensure that communication services are improved in a way that will contribute to the socio-economic wellbeing of subscribers.

She also said Sierra Leone as a member State of ECOWAS in 2017 signed the signed the ECOWAS regulation aimed at allowing West Africa citizens to enjoy free mobile roaming when traveling within the other 15 ECOWAS Member States.

The Deputy Minister further said the initiative was established to harmonize legal and tariff frameworks in order to eliminate roaming charges in the sub-region. “The effective implementation of the regional free roaming will enhance regional integration efforts which include free movement of persons and goods which is a cardinal objective of the ECOWAS Treaty of free movement of goods and services for all citizens irrespective of their economic status.

She underscored how the access to roaming services is not just about business travels and tourists being able to make calls especially in the border areas because they need to access affordable  roaming service but rather to strive to become a digitally inclusive society.

The Deputy Minister then launched the free regional roaming service and wished everybody a wonderful merry Christmas.

The Director General of the ARPT Guinea, Antigou Cherif, gave a background of the free regional roaming service saying it is geared towards transforming Africa in to a single digital market pointing out that free roaming is the first step and its plays a major role in the vision.

He also said that it was during the 3rd Board Meeting of Smart Africa on the 21st January 2016 in Addis Ababa that the President and other members anchored the important role ICT plays in the social-economic development of various countries and the initiative was formed.