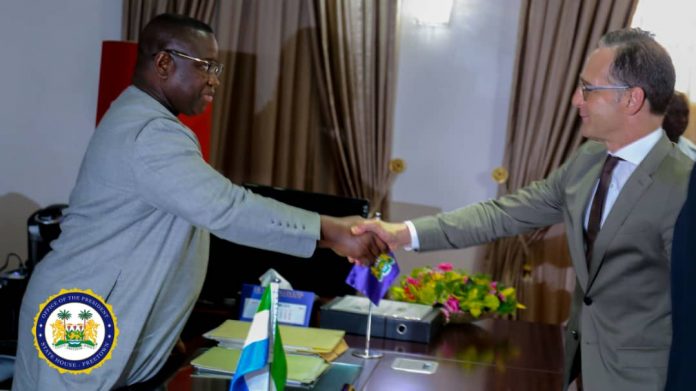 The Minister of Foreign Affairs of the Federal Republic of Germany, Heiko Maas, has paid a courtesy call on His Excellency President Julius Maada Bio at State House in Freetown.

Sierra Leone’s Minister of Foreign Affairs and International Cooperation, Dr Alie Kabba, who chaired the meeting, said his German counterpart was on his first visit to Sierra Leone. He further stated that they had had lengthy discussions and covered several issues that reflected the core priorities of the New Direction Government, adding that he had also spoken on the need to focus for on foreign direct investment. He used the occasion to highlight some key social issues and, in particular, referenced government’s stance on rape and sexual assaults, noting that that was being done to raise international awareness and support on the issue.

The German Foreign Minister said he was excited about visiting the country for the first time and disclosed that he was very interested in the development process in the country. He also sated that as a member of the United Nations Security Council, Germany was very interested in how conflicts could be prevented and solved, saying that Sierra Leone was a wonderful example which they were ready to learn from.

He further told the meeting that they wanted to put the topic of conflict prevention again on the agenda for the United Nations Security Council meeting in April when they would have the Presidency of the Council, adding that they were interested in examples of how different situations could be overcome and how civil wars, like the 1991-2001 rebel war in Sierra Leone, could be prevented.

He also assured that they were ready to put issues of sexual violence on the agenda while acknowledging remarkable stances the Sierra Leone government had already taken to raise public awareness, help victims through free treatment in hospitals and prepare the judiciary to take actions against perpetrators. He noted that the UN must focus on those issues because the increasing rate of sexual violence, including the use of rape as a weapon of war.

On his part, President Bio said that Sierra Leone was enjoying a very good relationship with Germany, adding that he was now focusing on strengthening that relationship and widening the level of cooperation between the two countries. He said his Government was working on a comprehensive Development Plan as a means of moving a lot of people out of poverty.

“We have placed premium on human capital development as a way to lay a solid foundation for development in this country. We have laid emphasis on diversifying our economy, not just being dependent on diamonds and gold but also on agriculture, tourism and other areas as multiple revenue bases.

“We have handled the economy reasonably well and we have been able to identify and generate more revenue than it has been done in the past. With that we have been able to support some of the basic activities of government. We want to stop dependency on aid so we are engaged in activities that are geared towards trade and investments. We are working on providing the right climate here that can be inviting for foreign investors to come in,” he said.

He said sexual violence had been around since the civil war but that it had worsened to the extent that he had to declare it a National Emergency, noting that he was very particular about the protection of girls but also excited at the prospect of discussing the issue at the Security Council.

President Bio, who doubles as Chairman of the Committee of Ten African Union Heads of State charged with leading a common position to secure two seats in the Security Council, said Africa had 1.2 billion people who were not represented in the Council, adding that 70% of the decisions being taken at the Council affected Africa and, therefore, the continent deserved to be represented on it.