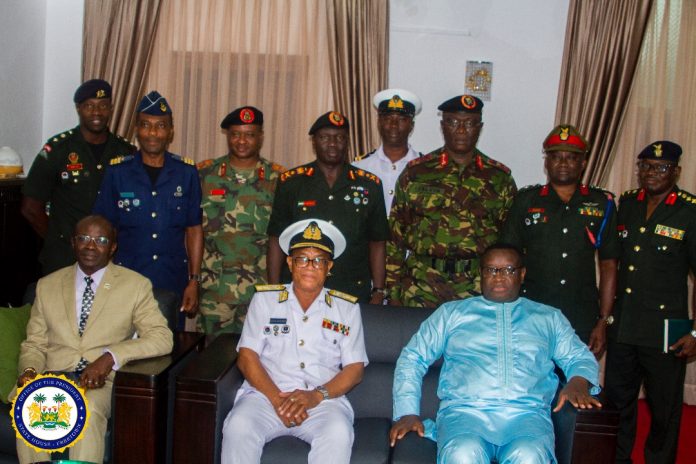 A delegation of the Ghanaian Armed Forces Command and Staff College has called at State House to pay a courtesy call on His Excellency President Julius Maada Bio.

Sierra Leone’s Deputy Minister of Defense, Rtd. Colonel Simeon Sheriff, who was chairman of the meeting, said the Ghanaian team was in the country to familiarise with contemporary issues in the sub-region.

He said the theme for this year’s study tour in Sierra Leone was “Fostering an Inclusive and Sustainable Development Agenda for Africa”. The aim was to enhance students’ view on global affairs with emphasis on the African continent and to analyse the factors and potential areas of bilateral and multilateral cooperation between the two countries.

Head of the Ghanaian delegation, Moses Kwado Beick Baffour, said since arrival they had visited and made presentations to different Ministries aligned with Sierra Leone’s development plan, saying that that made matters much easier for students to put Sierra Leone into perspective.

He also said that the visit was a testament of the long standing relationship between the two countries and expressed hope for further collaboration.

In his brief response, President Bio said that he was happy to receive military men in the country, saying that as the sub region was reintegrating there was need for such a visit to learn more about the situation in other countries. He said the nature of the training was very important as it provided inclusive growth and capacity building for military officers.

“We live in a highly interconnected world today, so such an exercise will provide a rich experience in learning about the culture of other countries and why other people do things differently. I find this exercise very important for the world that lies ahead of us. The military is a unique profession and I am very proud of it,” he said.