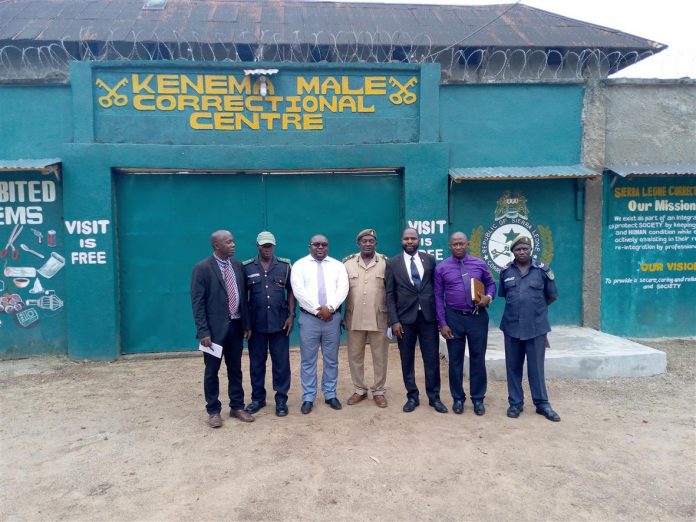 In a recent visit to the Eastern Regional headquarter town of Kenema in October 2019 for a meeting with non-state legal aid providers, I joined colleagues for a routine visit to both the male and female Correctional Centers. The visit was primarily meant to follow-up on findings from an earlier assessment in September instant which put inmates without indictments at 119.

The visit was my first to the center. I was excited but did not expect much in terms of real transformation which should ensure inmates have the requite skills that will earn them sustainable livelihood upon their return into mainstream society.  This is in part due to experience during my visits to the Male and Female Correctional Centers in Freetown. There has been a lot of hype about the change of name from ‘Prison’ to ‘Correctional Center’ which is one simple first step.

The test has been in ensuring the change in name is reflected in improving the prison conditions and more importantly in transforming the lives of inmates in terms of psychosocial support, acquisition of requite skills, trainings and reintegration. So far so good, the evidence on the ground shows that we still have a long way to go.

The grim reality during these visits are: serious overcrowding, huge numbers without indictments, numbers with indictments but not on trial, many on prolonged adjournment and judgment reserved and several others who have been over-sentenced or serving sentences beyond periods prescribed by law.

The case that stands out for me in one of these visits is the sight of a shy sixteen year old boy from Kenema serving a three year prison term for stealing a plastic bag of cocoa which he strongly denies.  I was part of the team led by the Executive Director of the Board to the Pademba Road Correctional Center on 13 December 2017. We had separate meetings with inmates from Blyden, Wilberforce, Howard and Clarkson Hall; Remand Inmates; Aged, Sick and Malnourished Inmates and inmates serving Life Imprisonment and those who have been Condemned respectively.

The boy was held in the block meant for the Sick, Aged and Malnourished. He accused the police in Kenema of deliberating inflating his age even though he had told them he is below eighteen.

I must confess the current Chief Justice of the republic of Sierra Leone has taken giant strides to address these problems through the Criminal Prison Courts, Criminal Call Over sessions and the judicial review of sentences.

There is also a rich history about the Kenema Male Correction center which qualifies it for an historical site. According to the Manager for the Kenema Male Correctional Center, Superintendent Christian Sesay, the ground floor is a stone wall building which will be 200 years in 2024. The building was used as a transit center for slaves being shipped to the Americas. Another floor was added to the building in 1974 to accommodate more inmates. The floor is not stone walled

The transformation in the prison service is empirical in these centers, in the sense that it can boast of a small but functional carpentry and tailoring workshop. There are plans to expand the former as a space has already been earmarked for that purpose.

The Tailoring workshop has five machines one of which is a zigzag machine. On display at the workshop were 15 nicely zigzagged half gowns (called rappels in local parlance). We were so impressed with the design, three of us on the team bought one each at Le 50,000 (US$ 5). Expectedly, we seized the opportunity to take a group picture at the entrance to the center as a way of publicizing the handiwork of the inmates and by extension encouraging others to patronize them.

The center has a ‘Tuck Shop’ where inmates can buy items at cost recovery prices. The items in the shop include sugar, biscuits, sardine, mega cola, colgate paste, cigarette (gold seal) and luncheon meat etc.

The Center also has a farm at Gbenderu a few miles away from the center where inmate grows crops including potato, cassava and groundnut. According to the Center Manager, proceeds from the sale go to the inmates. The Center also runs a bakery which supplies bread to inmates.

Inmates also have access to phone facility. They pay a minimal amount to make calls on weekdays and enjoy free calls on Sundays.

The female correctional center on the other hand had ten inmates which is less than its capacity. It is the cleanest center I have been to. The tiles in the toilets are stainless. The rooms are spacious. The floor, mattresses and beddings are clean and the air is fresh. The Officer in Charge of the center, Aminata Koroma relishes the fact that the center has a ‘Child Friendly Center’ which caters for the few inmates living with their children.  It has toys and a television set for these children. The center also has a garden, laundry and small block earmarked for tailoring workshop.

The visit was climaxed with a meeting with the inmates at the male correctional center. The staffs of the Board were greeted with an outpouring of affection for their services to the inmates. The wildest applause was reserved for the Legal Aid Counsel for Kenema and Kailahun District, Patrick Kamara.

The National Supervisor, Mohamed Korie told the inmates that all is not lost noting that there is life after prison and that they have an opportunity to rebuild their lives. He said Madiba Nelson Mandela came out of prison after 27 years to become the President of South Africa. ‘You can leave prison after serving your sentence and go on to become an important person in society,’ he said.