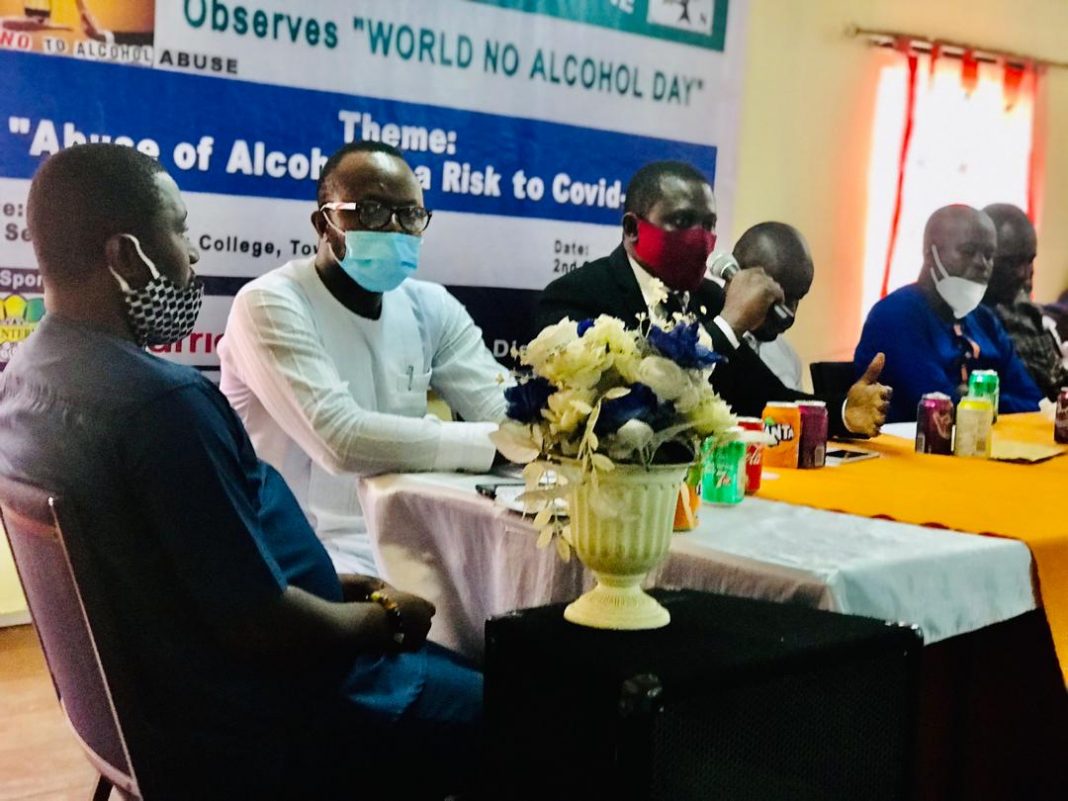 “While efforts were in place to improve on the health sector, the abuse of alcohol continues to undermine such efforts by killing potential workforce as the practice is common among young and productive age groups.”

The above statement was part of support to raise awareness against the fight on the abuse of alcohol in the country, by the Heath Network Sierra Leone on Friday 2nd October, 2020 commemorated World No Alcohol Day on the theme: “Abuse of Alcohol is a risk to COVID-19” at the Civil Service Training College hall, Tower Hill in Freetown.

In his address, Chairman Health Network Sierra Leone, Robert Kondema Kargbo said that the event marks another effort in finding plausible ways and means to raise awareness in the fight against the abuse of alcohol, adding that the exponential death toll caused by alcohol can only be compared with the sickly and deadly seasons predicted by the great demographer Rev. Thomas Malthus.

“Since this is a national fight one can strategically identify and stratify a sector that has the potential to multiply the benefits of their intervention, this is why the membership of Health Network SL has decided to work with the Ministry of Youth Affairs, Ministry of Health and Sanitation and the National Youth Commission to disseminate information, education and communication materials relating to alcohol abuse and its negative effects on our productive population” he revealed.

He told the gathering that the aim of the campaign is to reinforce the social norm that people don’t drink under the age of 18 and to raise public awareness about not drinking while driving attending official public businesses, pointing out that Alcohol is a psychological and physical addictive substance; frequent in-take can led to alcoholism and has the dominant effect of adversely affecting people of all age brackets particularly the most productive Segment of the country’s demography the young population.

He maintained that No Alcohol Day is part of the WHO’s effort to raise awareness and reduce the abuse of alcohol globally. He further disclosed that according to the World Health Organization, there are 2.5 million alcohol-related deaths each year, and of these, 320,000 are of people between the ages of 15 and 29 and that WHO has also said alcohol is the third leading cause of poor health around the world.

He stated that Health Network Sierra Leone has being observing this day annually since October 2013 and its surrounding weeks through community awareness and policy advocacy against the harmful effects of alcohol and drugs abuse, adding that their activities have concentrated on how alcohol and other drugs affect the very dynamic population between the ages of 10-35. Furthering that many data sources reveal that young people (particularly the unskilled and unemployed) not properly guided take into drinking alcohol without knowledge of their contents and the long run effects on health.

“As a health focused organization whose main aim is to achieve healthy community for everyone, hereby suggest the following cardinal principles for the action of government and development partners.

We believed that if all the above cardinal principles are taken into account, harm caused by alcohol abuse, such as public antisocial behavior, domestic violence and traffic accident will reduce to a very large extent. Also, there will be a very good health across communities”, he recommended.

Assistant Director Sierra Leone Standards Bureau, Tamba Kamanda, said that alcohol consumption is common among young people across country and that its attendant’s health problems are very glaring, stating that Efforts should be made by society to curb this menace.

He said that Sierra Leone Standard Bureau develops standard for the Manufacturing industry and that these standards are either developed or adopted in line with international standards (ISO), adding that the prescribe limits terms of the alcohol percentage for various categories of alcoholic drinks including brandy, whisky, spirits, and energy drinks.

He said the Bureau carries out tests and analysis on alcoholic products in order to ascertain whether standards are adhered to.We have learnt recently that young people are in habit mixing different types of alcoholic drinks fortified with energy drinks and bitters to make it more potent. Member of Pharmacy Board of Sierra Leone, Dr. Sahr Emmanuel Gbomor, congratulated Health Network- Sierra Leone for commemorating no alcohol day.

He said the Pharmacy Board of Sierra Leone was set up by an Act of Parliament in 1988 and reviewed in 2001 as a sole medicine regulatory agency in Sierra Leone, charged with the responsibility of ensuring that pharmaceuticals including drug nutritional agent cosmetics and chemical reagents in circulation are safe, efficacious and of good quality.

He noted that the Pharmacy Board will surely help in the future in investigative analysis into alcohol and alcohol containing products sent to the Pharmacy Board by sister law enforcement agencies, adding that the Board may like to note that it has observed with dismay the rampant abuse of alcohol and alcohol containing products by the general population especially the youths four country.

He went further to state that the Board will strongly recommend that advocacy and sensitization posed by alcohol abuse to the youths of this should be step up by Government, UN agencies and non-governmental agencies. Also the regulation of alcohol and alcohol containing products should be looked into by the Government.

Executive Director of Youth Against Corruption, Sheku Koroma, said youth violence takes many forms including bullying, gang violence, sexual aggression, and assaults occurring in streets, bars and nightclubs and that the victims and perpetrators alike are young people, and the consequences of youth violence can be devastating.

He said across the world an average of 565 young people aged 10 to 29 die every day through interpersonal violence, with males are at greater risk, and that for each death, there are an estimated 20 to 40 youth that require hospital treatment for a violence-related injury, adding that the impact of youth violence reaches all sectors of society, placing huge strains on public services and damaging communities reducing harmful alcohol use and violence among.

He said young people should thus be considered a priority for policy makers and practitioners across a broad range of agencies, with public health professionals having a key role in leading partnerships and prevention.