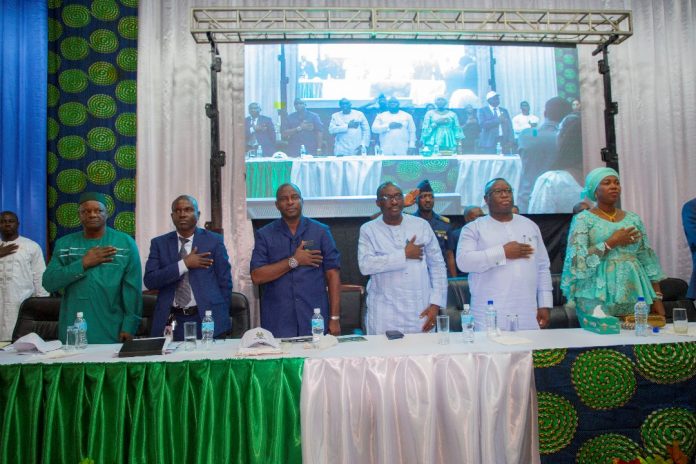 “There is a heavy direct and indirect cost to congestion. Alongside our interventions being announced today, it may be invaluable for our Government and our development partners to calculate the real monetary value of the cost of Freetown’s congestion. That may help us come to terms with its multiple realities and guide strategy and policy.

“I need not say that a congested city is not good for citizens, not good for tourism, not good for business, and not safe for our women and children. I need not emphasize that traffic congestion diminishes productivity, increases the cost of commuting through increased fuel and operating costs, and has environmental and health implications,” he said.

The President also pointed out that what one would see on a typical congested street of Freetown would be some used second-hand cars being used as taxis and trucks that were not road-worthy and ‘kekeh’ riders and taxi drivers who used the roads without much regard for traffic ordinances. He added that ‘Okadas’ – commercial bike riders – bobbed and weaved dangerously through traffic with two or more passengers balanced precariously on a single seat.

“Let me thank the World Bank through their representatives, World Bank Executive Director-Africa Group 1, Madam Anne Kabagambe, and our World Bank Country Manager, Gayle Martin. They have been reliable partners in development who understand this government’s commitment and vision. They and the World Bank are actively engaged in making the lives of Sierra Leoneans better. Thank you.

“Hitherto, there had been no coherence of policy or thinking about urban congestion and commuting and the potential of multimodal transportation had yet to be unlocked,” he observed.

The President recalled that in the Sierra Leone People’s Party manifesto, they were determined to address the current traffic congestion in Freetown “not only by the construction of new roads” and the widening of others, supplemented with pedestrian flyovers at the busiest urban intersections, “but also by employing proven and practical traffic engineering mitigation measures such as the use of actuated traffic light signals, directional traffic flows, channelisation, the use of pedestrian-only-roadways, commercial vehicles-only-roadways, peak and off-peak traffic directional flows, and effective traffic enforcement,” among others.

He added that the party was also determined that by reviewing the legal and regulatory mandates of multiple agencies in the sector, enforcing traffic regulations, employing multiple modes of transportation within Freetown, providing mass-transit facilities including markets, and increasing public bus services, they would be able to tackle the urban blight of traffic congestion.

“To our mind, one of the pathways, among others, to achieving the UN’s Sustainable Development Goal 11 – ‘Making cities sustainable’ is to invest in public transportation in a bid to build sustainable and resilient cities. To grapple with the complexity of the task at hand, we have determined that we should work with development partners and the private sector in designing an integrated, scaled, measurable, accountable, and sustainable pilot mobility plan,” he disclosed.

President of the Sierra Leone Drivers’ Union, Alpha Bah, thanked the World Bank and the Government of Sierra Leone for the project, saying that they were excited. He said that the project, among other things, would help to decongest the roads, improve safety for vehicular traffic and commuters. He added that the project would also reduce road accidents, restore and promote the dignity of transport service to commuters and other road users while also making driving professional and respectable.

Minister of Finance, Jacob Jusu Saffa, disclosed that the New Direction Government was able to mobilise a lot of resources through its engagement with donor partners, adding that that was a testament to the overall achievement. He expressed hope that the project would change and modernise Freetown.

Sierra Leone’s Minister of Transport and Aviation, Kabineh Kallon, said that he was delighted that the President was launching the project as a means of creating awareness to the people of Freetown and other municipalities across the country. He said the project was among other positive interventions the New Direction Government was making to significantly improve on urban mobility in the country.

The World Bank Executive Director said that she was excited to witness the official launch of the IRUMP, noting that she was especially pleased because the project looked at resilience of climate change, job creation that was crucial for youth and access to service and road safety. She said the project would also support the diversification of the economy and promotion of growth, promotion of human capital development among others.